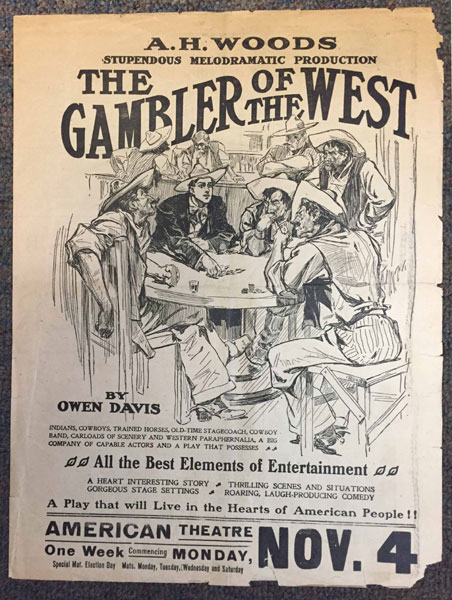 A.H. Woods Stupendous Melodramatic Production, The Gambler Of The West

Other works by OWEN DAVIS

4pp. theater herald, 11" x 14", c.1905 for this "Great Unexcelled American Play" featuring Indians, Cowboys, Trained Horses, Old-time Stagecoach, Cowboy band, Carloads of Scenery & Western Paraphernalia, A Big Company of Capable Actors and a Play That Possesses All the Best Elements of Entertainment. Poster style center spread with back panel as an outline of the plot synopsis and descriptive listing of the cast. The front cover is suitable for framing, with its old-style typography and outstanding drawing of four tough-looking cowboys losing at the card table to a good-looking young dude, who is undoubtedly the Gambler of the play's title. Albert Herman Woods, born Aladore Herman, was an American theatrical producer. He produced over 140 plays on Broadway. Woods had a stable of favorite playwrights, most notably Owen Davis, who he worked with for several years on melodramas. Brittle, with the usual edge chips and minor tears, but none affecting the type or graphics of this attractive old herald.