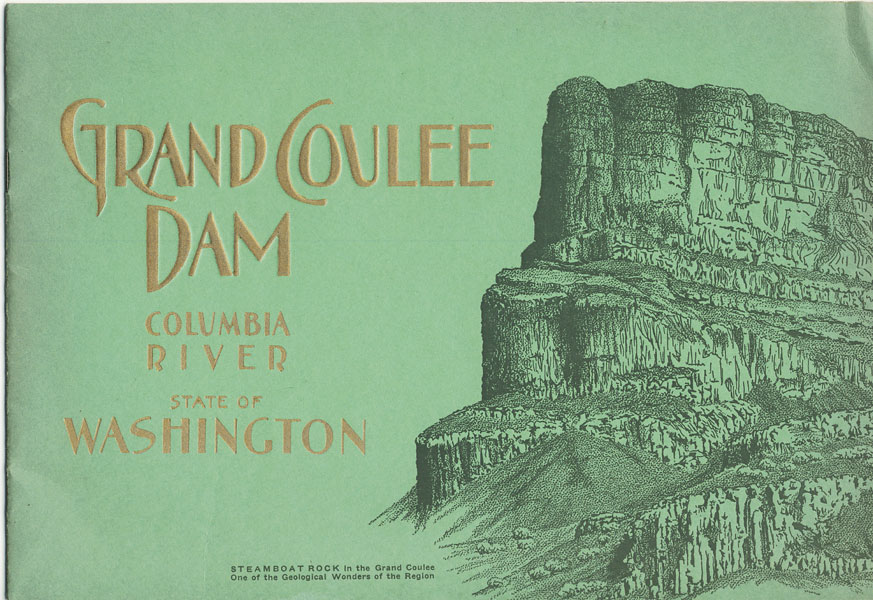 7" x 9 3/4" in green pictorial wrappers with title in gold and illustration of Steamboat Rock in green. 16 pp., illustrations, map. "The proposal to build the dam was the focus of a bitter debate during the 1920s between two groups. One wanted to irrigate the ancient Grand Coulee with a gravity canal and the other supported a high dam and pumping scheme. Dam supporters won in 1933, but for fiscal reasons the initial design was for a "low dam" 290 ft (88 m) high which would generate electricity, but not support irrigation. The U.S. Bureau of Reclamation and a consortium of three companies called MWAK (Mason-Walsh-Atkinson Kier Company) began construction that year. After visiting the construction site in August 1934, President Franklin Delano Roosevelt began endorsing the "high dam" design which, at 550 ft (168 m) high, would provide enough electricity to pump water to irrigate the Columbia Basin. The high dam was approved by Congress in 1935 and completed in 1942; the first water over-topped its spillway on June 1 of that year." This booklet is the story of the project in pictures, as well as text. (Photographs by K.S. Brown). 1-page map showing the location of the dam and Columbia Basin Irrigation area with roads to points in the state of Washington. Inside rear cover is information about how the project will supply power and irrigation as well as how the project benefits the Pacific Northwest and the United States. Light bend to top right corner and with light soiling to wrappers. Very good. A very interesting item.

The Quebec Bridge. Carrying The Transcontinental Line Of …
by Limited The St. Lawrence Bridge Company

A Century Of Progress In Cooking
The National Pressure Cooker, Chicago, Illiinois