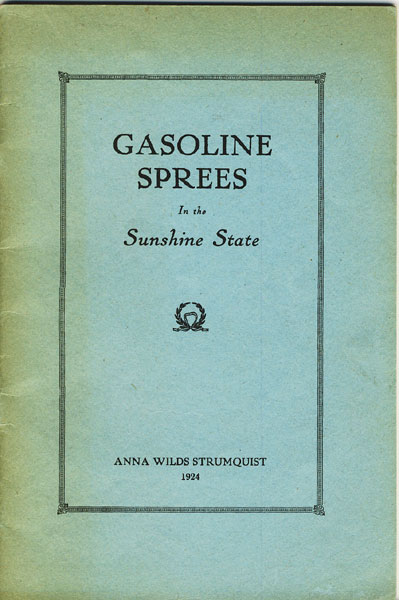 Gasoline Sprees In The Sunshine State

First edition. 8vo. 9" x 6" original printed wrappers, n. p. (61 pp.), illustrated. Inked presentation inscription by the author to friends and signed and dated by her in 1947. A scarce collection of breezy sketches of the author's travels by automobile and motorcycle around the remote parts of New Mexico, as well as a trip from San Francisco to the Grand Canyon. Three chapters were previously published in Motorcycle Illustrated in 1914, the rest are apparently first published here. One, "Above the Clouds on a Motorcycle," is credited to the author's husband, Nils John Strumquist. Among others, there is an account of an excursion to Acoma led by George Wharton James in 1917, a trip to see the ruined mission at Jemez, and a 600 mile circuit through southeastern New Mexico that included visits to the Gran Quivira ruins, the towns of Estancia, Encino, and Vaughn, and Roswell and the nearby the Bottomless Lakes.