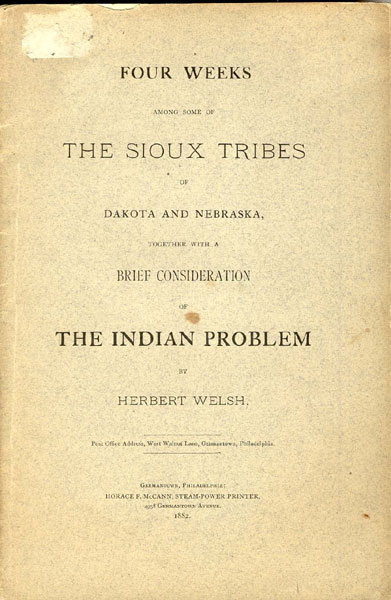 Four Weeks Among Some Of The Sioux Tribes Of Dakota And Nebraska, Together With A Brief Consideration Of The Indian Problem

First edition. 8vo. Original printed wrappers, [3]4-31[1] pp. The author has written on other visits to Indian villages and agencies, but this is an early visit and he describes the four weeks spent with the Sioux tribes. He sheds light on the Indian as they were and how they have adapted to the white man's ways by accepting religion, going to church, becoming Christians, etc. He notes the progress to develop schools, the reduction of military presence, the need for employment for the people, etc. A very positive outlook for the Sioux. After his stay, Herbert Welsh became known as an earnest advocate for the rights of Indians. His actions resulted in the founding of the Indian Rights Association in Philadelphia, and he served as its corresponding secretary for 34 years and its president for 11 years. Over the next 30 plus years, he urged the public and the United States Congress to provide education for Indian children and to extend civil law to their reservations. Light tanning and with splitting at tops and bottoms of spine along with light glue residue to top of front panel as well as minor chipping to tops of front and rear panels and neatly stamped on title page, "Withdrawn from Nebraska Historical Society." Scarce.

St. Louis Through A Camera
by James Cox

Through The Land Of The Shining Mountains/Trailing The …
Bob. Fletcher [Montana State Highway Commission]

Optimists In A Desert "Paradise"
by ("Mickey") Mrs. Keith Carlton