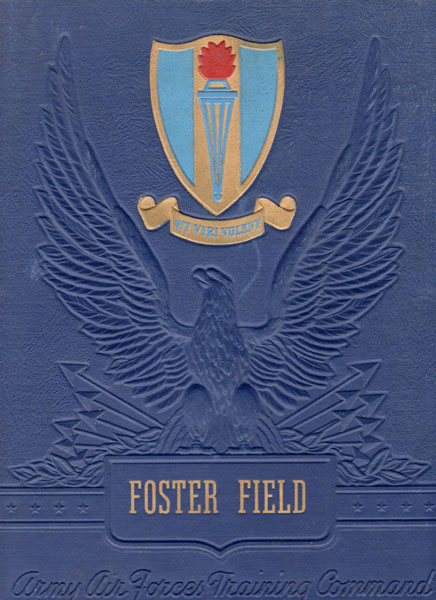 Publication: Published by and for the Officer and Enlisted Personnel of Foster Field, 1943, Victoria, Texas

First edition. 4to. Blue, light blue, red, and gold embossed designed pseudo-leather binder, pictorial front endpapers, 104 pp., illustrated from photographs, portraits, double column. Includes a history of “The Development of the Army Air Force. Portraits of “Special Staff”; portraits of Class 43-G and 43-H Aviation Cadets; and portraits of several other squadrons that trained at the base. In addition to aviation cadets and squadrons there also was the 734th WAC Post Headquarters Company with photographs and names of each of the ladies; the 987th Quartermaster Platoon Transportation Air Base and the 60th Aviation Squadron, both staffed by African-American soldiers along with photographs and names of each of the men. The first contingent of soldiers arrived August 12, 1941 to activate the advanced fighter pilot training school. This booklet observed the second birthday of Foster Field. It is important to note that at this time in history it was the U. S. Army Air Force. The U. S. Air Force was founded later. The Texas State Historical Association says: "Foster Army Air Field, an advanced single-engine flying school for fighter pilots six miles northeast of Victoria, was established in the summer of 1941. A local funding campaign led by E. J. Dysart the previous spring had raised some $17,000 to locate the base at Victoria as an economic asset. Subsequent government construction cost more than $4 million. The initial class of cadets arrived in September 1941 and served under Lt. Col. Warren R. Carter, the first commander. WACs began to arrive the following May. The base was known until January 15, 1942, as Victoria Field and then renamed in memory of Lt. Arthur L. Foster, a United States Army Air Corps instructor killed in a crash at Brooks Field in 1925. Foster's son received his training and commission at the base in the spring of 1942. Cadets used the North American AT-6 "Texas" and Curtis P-40 trainers to drill in aerial gunnery, though actual practice took place on ranges located on Matagorda Island and Matagorda Peninsula. Many pilots returning from overseas service were taught to become aerial gunnery instructors at Foster Field. The local influence of the base was social as well as economic. In 1941 the Victoria County Courthouse recorded a 25 percent increase in marriage licenses issued. After World War II the Foster Field site returned to its owners, the Buhler and Braman estates." Light foxing to the final few pages else a near fine, bright, tight copy.

Spanish Influence On The Old Southwest. A Collision …
JERRY AGNEW