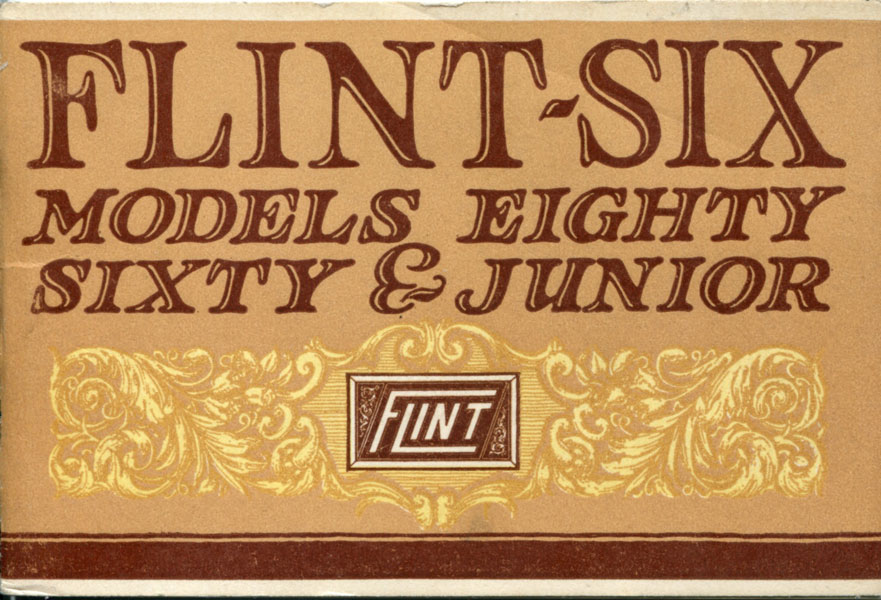 First edition. 3 1/2" x 5 1/4" color, decorated wrappers, n. p. (24 pp.), full-page illustrations from photographs. Full-page views of Model "Eighty" 5-passenger Touring car, Model "Eighty" Roadster, Model "Eighty" Sport Touring, Model "Eighty" Coupe, Model "Eighty" 5-passenger Sedan, and Model "Eighty" 7-passenger Sedan. Accompanying the Model "Eighty" series are vehicle specifications and prices for each vehicle, F. O. B. Flint, Michigan. Also pictured are full-page views of Model "Sixty" Touring car, Model "Sixty" Roadster, Model "Sixty" Roadster-Coupe, Model "Sixty" Sedan, and Model "Sixty" Brougham Accompanying the Model "Sixty" series are vehicle specifications and prices for each vehicle, F. O. B. Flint, Michigan. Finally pictured and with vehicle specifications and pricing F. O. B. Flint, Michigan, is the Flint Junior Coach-De-Luxe, which is "designed and built to Flint standards, and meets the demand of those thousands of motorists who have desired Flint quality in the field of low-price sixes." The Flint was an automobile marque that was assembled by the Flint Motors Division, Flint, Michigan between 1923 and 1927. Flint Motors was a wholly owned subsidiary of Durant Motors Company (USA). The Flint was considered an assembled car because Durant Motors used components manufactured by outside suppliers to build its automobile lines. The cars were powered by a 6-cylinder Continental engine, and its body stampings were made by Budd in Philadelphia. The origins of the Flint can be traced back to the Willys car company, which under the direction of Walter P. Chrysler had been working on a prototype for a proposed 6-cylinder car. Willys had to sell off this prototype as part of its efforts to raise cash during a financial crisis. Once acquired, this prototype was further modified to create the Flint. Following financial troubles at Durant Motors, the Flint was discontinued in 1927. The Flint was priced to compete with Buick, which was also assembled in Flint, Michigan. Automobiles produced by Flint should not be confused with those manufactured by the Flint Automobile Company, founded by A. B. C. Hardy in 1901, and which went out of business in 1903 after manufacturing only 52 automobiles in the $750–$850 price range. Inked name an address on rear cover and minor wear to the top edges, else a near fine copy.