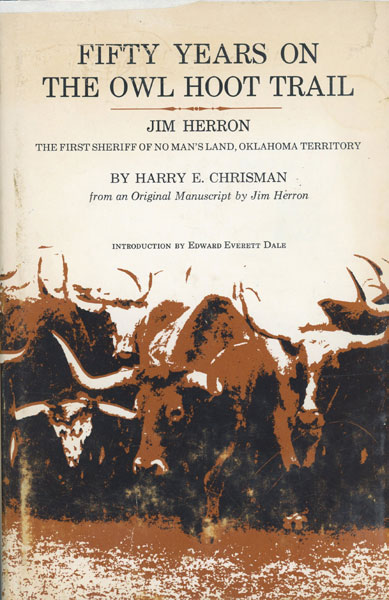 First edition. 8vo. Brief inked presentation inscription on the dedication page by the author. Cloth, titles stamped in gilt on the spine, maps on front and rear endpapers, introduction, preface, acknowledgments, illustrated from photographs and facsimiles, appendix, notes bibliography, photo credits, index. An original manuscript by Jim Herron is the basis for this book. Jim Herron led a fantastic life as a Texas cowboy, and at fourteen he went up the cattle trail in 1880 and settled in the Oklahoma Panhandle or as it was known then "No man's Land," 5,800 square miles which the U.S. Govt. forgot. This area was without laws, without land offices or courts. He returned and settled in the Oklahoma Panhandle where he later became sheriff. Because he was involved in so many significant events of the late 19th and early 20th century, it is a social and political history of the times told vividly with keen perception.

"A Texas Sheriff." A Vivid And Accurate Account …
by Henry C. Fuller