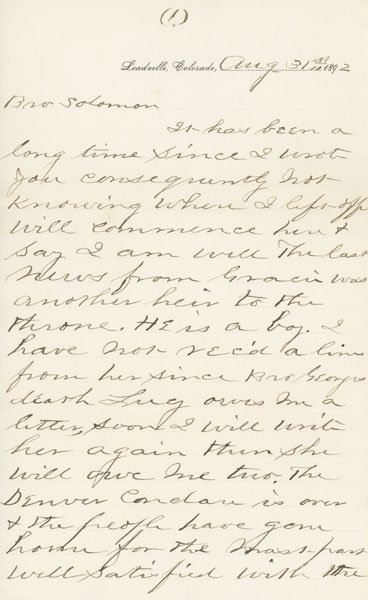 Dated "Aug. 31st, 1892." A four-page letter [written on the rectos of paper measuring 6" x 9 1/2"] from a "Bro John" (unidentified) to fellow Mason Solomon F. Sears of Ann Arbor, Michigan. The letter recounts the conclusion of the 1892 Conclave of Knights Templar in Denver and the return of the participants to their homes. The author notes, amusingly, that one man was pleased to have been able to purchase what he thought were small squares of silver from a boy on the street, only to find out they were pieces of lead. He goes on to express his support for the Free Silver movement and claims "the people of the west will vote that way, not with the hope of electing [James] Weaver [the Populist Party's opposition to "free silver" which was already creating severe economic consequences in Leadville: "I met seventy (70) men within the last few days out of employment. We do nearly as well with Silver at eighty two cents as you would with apples at a cent barrel. If England & Wall Street consent we will hope for better times. Free Coinage." In addition, he mentions a mutual friend who has been laboring at the Holden Smelter, then the newest and largest silver processing mills in the country, and the robbery-murder of another fellow who "had done quite well in Texas (possibly Leadville's Texas House which was the most extravagant gambling parlor in America) and sold out to go to California & Washington but he was robbed & killed as he was about to start." An interesting commentary just prior to the total collapse of the silver boom following the repeal of the Sherman Silver Purchase Act in 1893.

The Upper Missouri Fur Trade: Its Methods Of …
by Ray H. Mattison