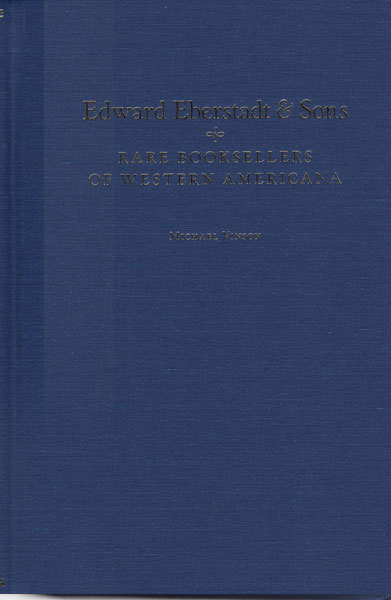 First edition. 8vo. Blue cloth, titles stamped in gold gilt on the front cover and spine,165 pp., frontispiece (photograph of Edward Eberstadt 1883-1958), foreword, acknowledgments, chapter footnotes, bibliography, index. Foreword by William Reese. "I've been fascinated by the Eberstadts for nearly thirty years - ever since my beginning in the business when rare book dealer Michael Heaston encouraged me to read their catalogues in order to learn about Western Americana (he set the example by having a stack of their catalogues in his bathroom to peruse). The book, Edward Eberstadt & Sons: Rare Booksellers of Western Americana, also features an introduction by William Reese who has drawn on his extensive knowledge of the American book trade and acquaintance with Lindley Eberstadt. Edward Eberstadt entered the rare book business quite by accident. Sometime in late 1907 or early 1908 he was crossing the Brooklyn Bridge when the urge to find a bathroom led him to a mechanic's garage. He found that old books were being used for the toilet paper, and one old book in Spanish intrigued him. He bought it from the garage for fifty cents, and took it to Wilberforce Eames, the renowned bibliographer at the New York Public Library. Eames informed him that the book was a Mexican incunabula, printed in the 1500s, and even though incomplete, still quite rare. Eberstadt sold his book to New York city rare book dealer Lathrop Harper, who became his mentor and friend. Later Edward was joined in the rare book business by his two sons, Lindley and Charles, and eventually they helped build nearly every major collection of Western Americana, including the Coe and Beinecke collections at Yale, and the Frost Collection at the American Antiquarian Society. They helped build Thomas W. Streeter's Collection of Americana (Streeter was fond of Ed, and there are many anecdotes in the book about their relationship, including Edward's drinking, card games, and speculation in the stock market in the 1930s). After Streeter's death, the Eberstadts organized the sale order of the books for Parke-Bernet and the famous Streeter Sale. The Eberstadts also helped build the Rollins Collection at Princeton, the DeGolyer Collection at SMU, the Earl Vandale Collection at the University of Texas, the Graff Collection at the Newberry Library, the Denver Public Library Western Collection and many others. Edward and his sons were talented and entertaining letter writers, so even though the business records have not survived, nearly every collector kept their letters (except Henry Wagner, who admitted regretting not doing so). I have traveled to nearly every collection I could find in order to tell their story, which the book covers up to the purchase of the inventory of John H. Jenkins in 1975." ---- Michael Vinson. As new, unread copy without dust jacket, as issued.

Letter Of The Secretary Of War Communicating, In …
by William W Belknap