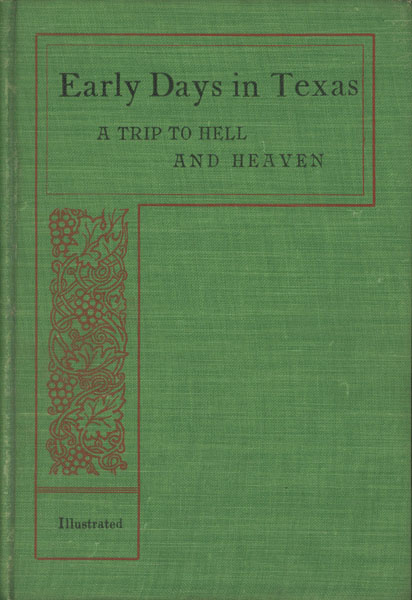 Early Days In Texas; A Trip To Hell And Heaven.

Other works by JIM MCINTIRE

First edition. 8vo. Green cloth decorated in red and lettered in black, 229 pp., frontispiece [portrait], preface, illustrated, plates, portraits. Adams 150 "extremely rare. Author served as a peace officer in several towns of the West....He was city marshal of Las Vegas, New Mexico, when the mob tried to take Dave Rudabaugh from the train while Dave and Billy the Kid were prisoners of Pat Garrett." Dykes, Kid 37: "according to McIntire, he was a J.C. Loving cowboy, Texas Ranger, hide hunter, frontier peace officer, saloon keeper, gambler, and fugitive from justice." Herd 1405 says "Rare." "Although the author was better known as a gunman, he tells some of his experiences as a cowboy." Six Guns 1415 says "The author himself a fugitive, earlier served as a peace officer in several towns of the West. He tells of Billy the Kid, Jim Courtright, Dave Rudabaugh, Wyatt Earp, and Mysterious Dave Mather." Howes M 113 says "Reminiscences of an old faro dealer." Tiny hole along rear spine channel, all page edges uniformly tanned (as is the usual case), else near fine, bright, tight copy. An exceptional copy of a book considered to be "rare" by all references.

The Big Bonanza, The Story Of The Comstock …
C. B GLASSCOCK