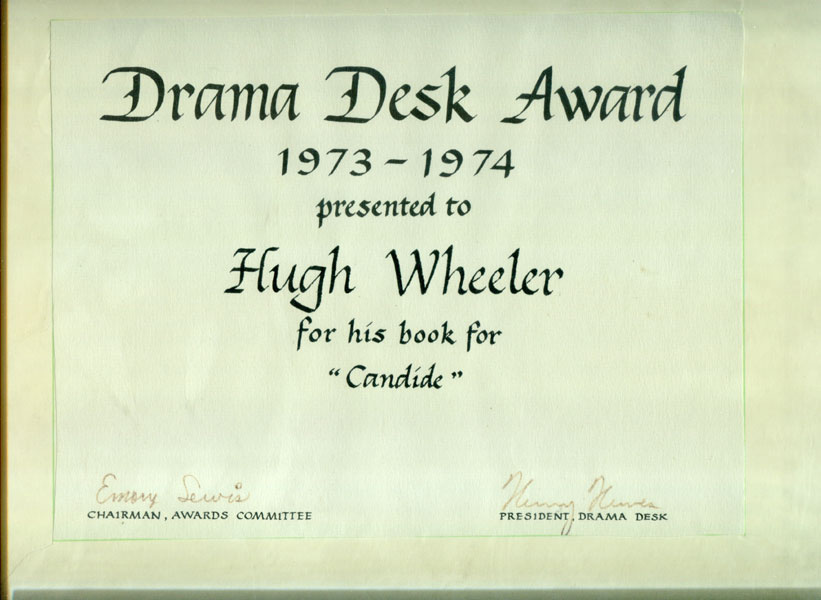 Other works by HUGH CALLINGHAM WHEELER

An 11" x 13 1/2" framed certificate commemorating Wheeler's award for his book for the Broadway Musical Smash Hit CANDIDE. This item came from the estate of Hugh Wheeler, who died in 1987. Among his many talents, Wheeler wrote mysteries using the pseudonyms Patrick Quentin, Q. Patrick, and Jonathan Stagge. Some of the stories were written in collaboration with Richard Webb. The most famous pen name was Patrick Quentin under which amateur detective Peter Duluth was introduced in A PUZZLE FOR FOOLS. In the 1960s and 70s, Wheeler achieved success as a playwright and librettist receiving awards for Broadway musicals, CANDIDE, A LITTLE NIGHT MUSIC, SWEENEY TODD, TRAVELS WITH MYAUNT,and PACIFIC OVERTURES. He won the Tony Award for Drama in 1973 and 1979; the New York Drama Critics Circle Award in 1973, 1976, and 1979. In 1962, he won the Mystery Writers of America Edgar Allan Poe Award for THE ORDEAL OF MRS. SNOW.

Underneath Every Stone.
PAULA GOSLING