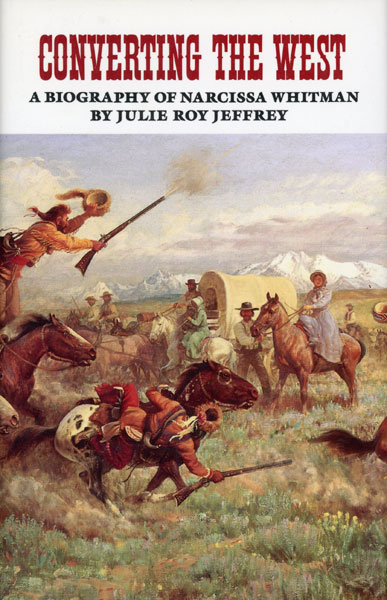 Converting The West. A Biography Of Narcissa Whitman

First edition. 8vo, Maroon fabricoid, titles stamped in gilt on the spine, xvii [blank], 238 pp., Series Editor's preface, preface, illustrated, portraits, maps, sources, index. Narcissa Whitman and her husband, Marcus, were pioneer missionaries to the Cayuse Indians in Oregon Territory. Growing up in New York, following her marriage to Marcus Whitman, Narcissa spent most of 1836 traveling overland with him to Oregon where she could mission to the Cayuse. She enthusiastically began service as a missionary there, hoping to see many Indians adopt her message of salvation through Christ. But not one Indian ever did. Cultural barriers that Narcissa never grasped effectively kept her at arm's length from the Cayuse. Gradually abandoning her efforts with the Indians, Narcissa developed a more satisfying ministry ... She taught and counseled whites on the mission compound, much as she had done in her own church circles in New York. As new, unread copy in dust jacket with attractive wraparound cover art.