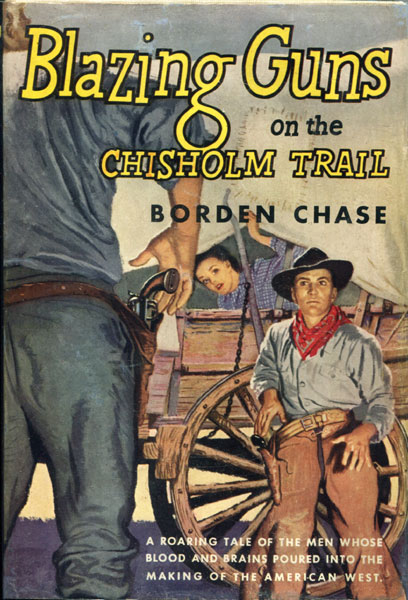 Blazing Guns On The Chisholm Trail

First edition. 8vo. Pseudonym of Frank Fowler. The source for the 1948 Western classic "Red River," which was directed by Howard Hawks and starred John Wayne and Montgomery Clift. Chase, a cowboy by way of Brooklyn, went to California to write other screenplays including "The Fighting SeaBees," which also starred John Wayne and, later on, two critically acclaimed Anthony Mann Westerns, "Bend of the River" and "Winchester '73," both of which starred James Stewart. A fictional account of the first cattle drive from Texas to Kansas along the Chisholm Trail. Facing ruin in the post-Civil War South, Texas rancher Thomas Dunson leads a cattle drive north to where he hopes to find a buyer. But his hard ways and unilateral leadership alienate the cowboys riding with him, even young war veteran Mathew Garth, whom Dunson raised like a son. Red River has been selected by the Library of Congress as a national film treasure. A fine copy of this poorly produced title in a fine, bright dust jacket with light restoration to the spine ends. Housed in a clamshell case with dust jacket front cover depicted on the front cover and spine.

Recognizance Bond Signed By U. S. Marshals Chris …
by Chris And G. A. Porter Madsen

Letter From The Secretary Of The Interior, Recommending …
by J. P Usher

The Mccartys, They Rode With Butch Cassidy
by E. Richard Churchill