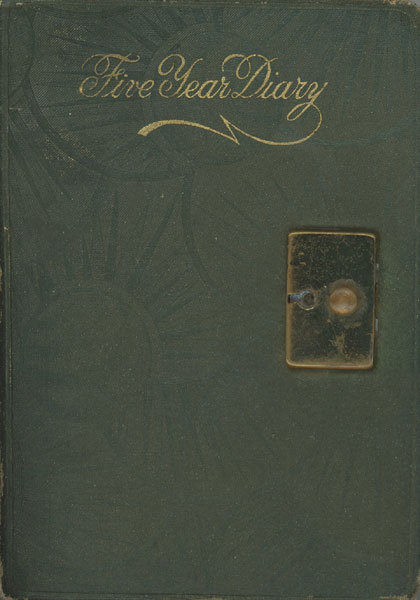 First and only edition. 12mo. Original cloth, gilt with a metal clasp, 365 pp. Diary of Ethel Hutchins, kept during her college years at Bucknell University. Originally from the Englewood area of New Jersey, Ethel begins her diary with the freshman orientation on September 11, 1929, and keeps it through the end of her senior year on July 16, 1933. She also spent time at Rider College and Rutgers. Among her many observations, she records the freshman rush experience in the Greek system at Bucknell, receiving a bid from Zeta Gamma Tau "but rejected all." She maintains an active social life, with plenty of dates and parties at fraternities, noting in her diary which fraternity her dates belong to. On December 14, 1929, she writes (underlined), "Cut my hair!" and one imagines her in a flapper's bob for the remainder of college. She attends concerts and shows, and generally seems to have a grand time. In June 1930, she ends up going steady with one Andy Lobel, and they remain an item for the duration of her diary. During the summers they spend time at the shore, visit New York, and swim frequently. The diary, designed to record five years of information, contains five sections for each calendar day; thus each page records events for any given day over the course of five years. One can, for instance, see what each of her birthdays was like on the page for October 12. In 1930 she writes, "Am now a woman in other words, have reached my 18th birthday. Andy gave me a beautiful necklace & bracelet & in eve we went out with some gin. In all I had a very happy birthday." An interesting peek at the life of a co-ed at the end of the Jazz Age. Closing clasp missing, light wear and soiling, with text damp stained around the edges, else a good, tight copy.

A History Of Piute County
by Linda King Newell

The Mclaurys In Tombstone, Arizona. An O. K. …
by Paul Lee Johnson

Reno. The Recreational Center Of America. This Book …
by John F. Ness