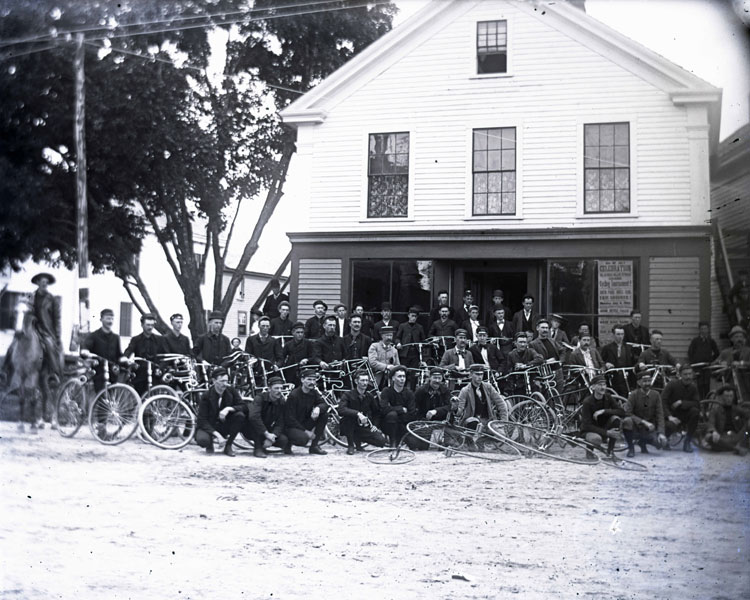 Collection Of 4" X 5" Glass Plate Negatives Of Cyclists And Racing In Oxford County, Maine At The Height Of The American Bicycle Craze In 1892

First edition. Twenty three glass plate negatives measuring 4" x 5" each. Although the bicycle had been around for several decades by the 1890's, technological innovations in the late nineteenth century that made bikes lighter, faster, and easier to ride led to a new burst of enthusiasm for cycling among the American public. People of all ages and social classes purchased bicycles and took to the streets and country lanes, sparking a movement to improve the quality of roads. Monthly magazines began publishing long articles about bicycle tours, newspapers added regular columns on the sport and filled their pages with ads for bicycles and accessories, doctors discussed the health risks and benefits, women’s skirts got shorter to facilitate riding (much to the dismay of some), and hundreds of new cycling clubs organized races and outings. One such club was the South Paris Wheel Club in Oxford County, Maine. This collection of rare images documents the activities of the South Paris Wheel Club on the Fourth of July, 1892. As part of a larger Independence Day celebration that also included a baseball game, the Wheel Club sponsored both a "Grand Cycling Tournament" and "Grand Bicycle Parade." Fourteen of the photographic plates were taken at the Oxford County Fairgrounds, and most of these capture the tournament in progress showing groups of racers assembling at the starting line and then on the move, as spectators line the rails and officials look down from their stand above the tracks. Most appear to be straightforward races, but one unique view shows a man on a high-wheeled unicycle clearing an obstacle either as part of an obstacle course or a trick-riding display. Also taken at the fairgrounds are shots of the bustling crowd and small groups of men and women enjoying the day. The rest of the images were taken in what appears to be a small downtown (presumably South Paris). These include shots of a large gathering of men with their bicycles most likely assembled in preparation for the bicycle parade, and including some high wheels as well as arresting portraits of individual men and boys posing with their rides. Occasional scratches or light spotting to a few plates else very good condition. A rare set of glass plate negatives.

Gopsill's Street Guide Of Philadelphia. The Only Authentic …
JAMES GOPSILL