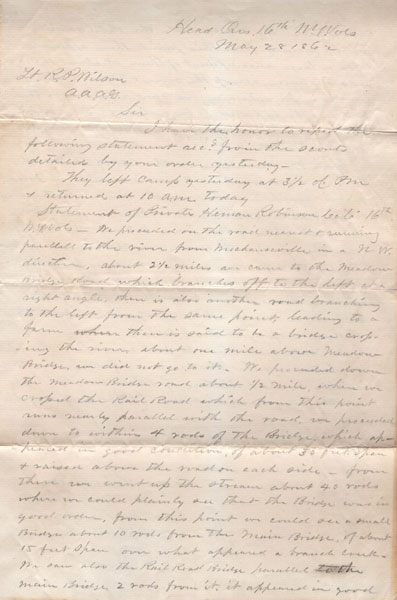 2-page hand written letter on 12 1/2" x 8" paper, folded t approximately 3" x 8." A rare scouting report dated May 28, 1862, written by Acting Adjutant 2nd Lieutenant Scott P. Moore, Company C, and written to Lieutenant R.P. Wilson, A.A.A.G. 16th NY Volunteers. The 16th New York Volunteer Infantry Regiment was organized at Albany, New York, in 1861. The Regiment lost 5 officers and 106 enlisted men killed or mortally wounded and 1 officer and 85 enlisted men to disease during the Civil war. According to records on May 15, 1862 the Regiment advanced to Cumberland; May 16th they advanced to White House; May 17th they advanced to Tunstall's Station; May 18th they attached to 2nd Brigade, 1st Division, 6th Army Corps; May 20th the crossed the Chickahominy and on May 22nd the Regiment was near Mechanicsville. At this point, the reconnaissance took place and the report was written. In the report Lt. Moore states that according to Private Herman Robinson of Company C, 16th NY Volunteers, the reconnaissance party left the camp at 3:30 p.m. one evening and returned the next morning at 10. During their surveillance they proceeded parallel to the river from Mechanicsville in a northwesterly direction for 2 ½ miles where they came to the Meadow Bridge Road where the road then branches off either left or right. The party traveled down the Meadow Bridge and crossed a railroad, which ran parallel with the road. They, "proceeded down to within 4 rods of the Bridge, which appeared to be in good condition." From there the party advanced buck up the stream about 40 rods. Lt. Moore goes onto to describe additional bridges seen as well as their conditions and locations. "We could hear the Rebel soldiers talking plainly from this point, these appeared to be a large encampment of them at about 40 rods distance across the river and through the woods." In addition they saw a picket on the bridge who appeared to be watching them and also saw a cavalry picket on the side hill. Report goes on to describe conditions from Mechanicsville back to camp. "A contraband said he had come from Richmond on Saturday & that there were no fortifications till within a short distance of Richmond, but troops all the way into Richmond (Right smart of them)." Letter is written in pencil and is very legible. There is light soiling and tanning along with a couple tiny holes to folds. A very special item.

Map And Guide To The Great Serpent Mound, …
by W. H. Cole

In The Light Of The Flares. History Of …
by Sheep River Historical Society