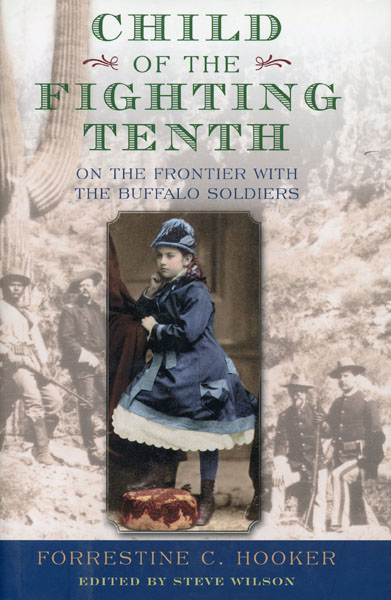 First edition. 8vo. Two-tone blue cloth and green boards, gold stamping on the spine, 272 pp., frontispiece, introduction, illustrated from photographs, chronology, places to visit, further reading, index. A memoir detailing the frontier childhood and young adulthood of the daughter of Charles Cooper, one of the officers in the Tenth U.S. Cavalry. "This memoir by Forrestine Cooper Hooker details her childhood and young adulthood in the midst of the frontier cavalry. Hooker's father, Charles Cooper, was an officer in the Tenth U.S. Cavalry, one of two regiments with black troops, known as the Buffalo Soldiers, commanded by white officers. Hooker's stories capture the drama of growing up in the frontier army, the Indian wars on the plains, the Geronimo campaign in the Southwest and Mexico, her love for the regiment and the Buffalo Soldiers, their admiration for her, and even her lost love for a dashing young cavalry officer. Her narrative is by turns compelling, charming, humorous, and warm. "Much on Indian Territory, Camp Supply, Fort Sill, Fort Concho, Fort Davis, Fort Grant, Camp Bonita, the Geronimo Campaign, the capture of Chief Mangus, friends and memories of Fort Apache, and much more. As new in dust jacket.