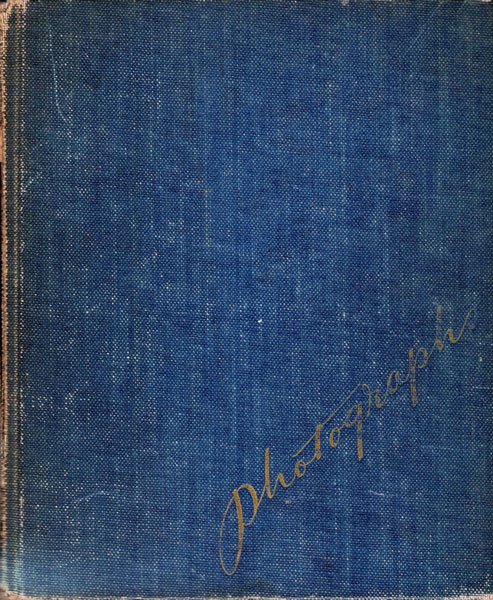 by An American Soldier

Publication: Photographed in many Japanese Locations, with most of the loose photographs taken in Okayama, Japan, n d (ca 1945), Okayama

First edition. Blue cloth photograph album, 124 silver gelatin photographs, mostly 2 1/4" x 3 1/4," with 106 of them in corner mounts. A fascinating vernacular photograph album capturing scenes in American-occupied Japan just after the Second World War. Most of the photographs are captioned in white ink on the black album pages, and organized in sections such as “Landmarks,” “The People,” “The Cities,” “The Military,” and “Personalities.” “Landmarks” include views of sites in Kokura, Yakata, Okayma Prefecture, picturing shrines, country homes, water works, the “International Military Tribunal Far East,” and more. “The People” shows Japanese residents of all ages, some in Western dress, others in traditional Japanese garb, standing in front of structures, on the streets, at a military checkpoint, playing “yakkyu national game” [baseball], swimming, and other activities. The section on the cities comprises street views in Okayama, Kokura, Fukuoka, Hiroshima, Yakata, Tokyo, Kyoto, and Yokohama. Surprisingly, the four shots of Hiroshima do not contain much evidence of destruction, and provide a rare, contemporary glimpse of areas of the city not leveled by Little Boy. Views of Tokyo include the Dai Ichi Building, the Imperial Museum, and an image of an American soldier "on the Ginza." The various views in the other cities show Japan's largest steel works, a partially-demolished department store, temples, and the Yokohama wharf. The military section includes photographs of Okayama Post, the "A.G. Office," barracks, headquarters of the 24th Division in Kokura, Kyushu, the Kokura Arsenal and Post Exchange, Fukuoka's 118 Station Hospital, and more. The "Personalities" section is comprised of shots of American soldiers in and out of uniform, almost all of them identified by their first names or nicknames. This section also includes photographs of "A.G. Girls," a few Japanese people identified by name, American soldiers at the War Ministry Hotel in Tokyo, U.S. soldiers at the "4th Repl. Depot" in Sobudai," and more. A handful of the captions, and some of the loose photographs, are captioned in Japanese. Some of the loose photographs are stamped on the verso "Jack Woytych" with his Wisconsin address, though it is unclear whether this refers to the owner/photographer of the album or the printer of the photographs. Most of the loose photographs emanate from Okayama. A noteworthy collection of personal images from an American serving in Japan at the end of World War II. Moderate wear to the spine ends and spine panel, light edge wear and rubbing to the extremities, else a very good copy.

A Brief History Of Jirah Isham (Of New …
by Mary Allen. Phinney