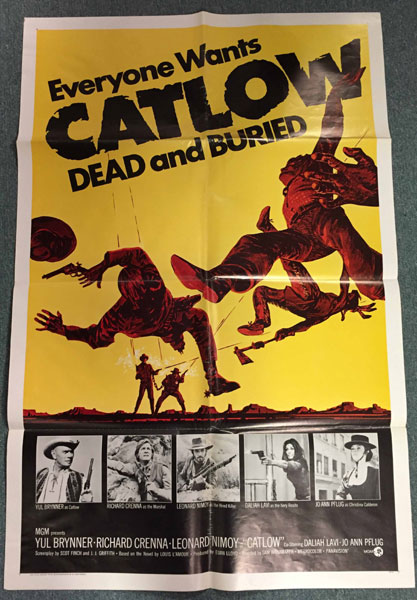 One sheet 27x41" poster from the original 1971 release of this MGM western, based on the novel by Louis L'Amour, and so credited on the poster. Starring Yul Brynner, Richard Crenna, Leonard Nimoy, Daliah Lair, and Jo Ann Pflug. "Ben Cowan and Bijah Catlow had been bound as friends since childhood. By the time they grew to manhood, Catlow had become a top cowhand with a wild streak. It took just one disastrous confrontation with a band of greedy ranchers to make him an outlaw. And when he crossed that line, it was up to U.S. Marshal Ben Cowan to bring him in alive." Very good, unused, folded into sixths as distributed. Attractive.

The Roadrunner In Fact And Folklore.
by J. Frank Dobie

Kings Of The Bs. Working Within The Hollywood …
Todd And Charles Flynn Mccarthy [Edited By]