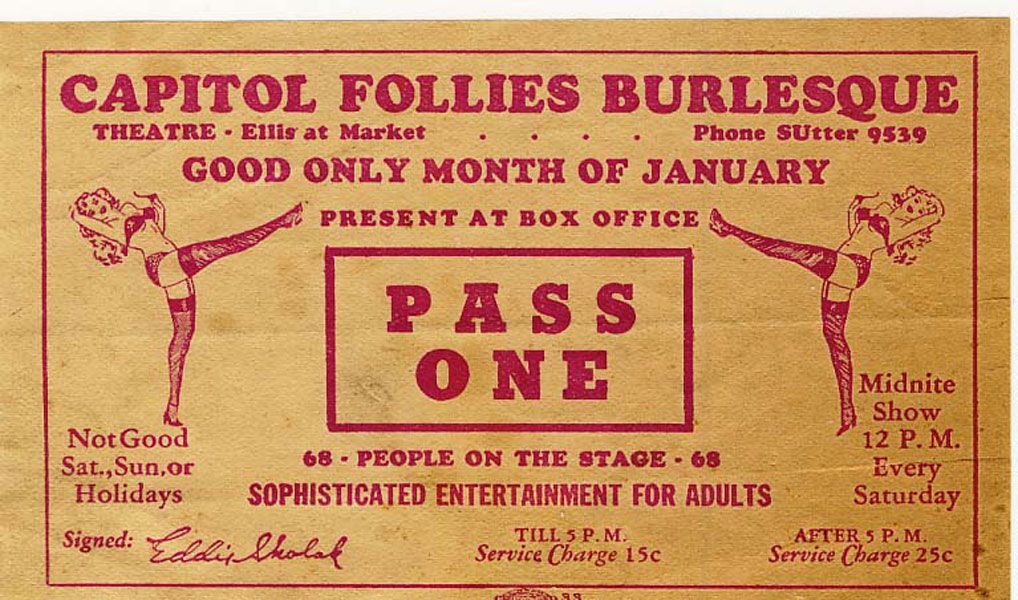 3" x 5" pictorial single sheet, printed one side only, pink text and illustrations, penciled-in name and address and "Pd 60 cents" on verso. A fragile survivor of a time when entrepreneurship and risque ventures might have been a good way to weather the Great Depression. In 1930, faced with stiff competition and a wide-spread move from conventional stage shows to film entertainment, the Capitol Theatre on Ellis Street was flagging until a Chicagoan named Eddie Skolak arrived with a small suitcase and big dreams. He launched the Capitol Follies Burlesque as "juicy," "glamorous," and "Parisian" adult entertainment, considered tame by today's standards, but spicy and alluring enough for the 1930s. Unfortunately for Mr. Skolak, he would discover that, though generally successful, the running of a business with almost eighty scantily clad women and three thousand seats was extremely expensive. In 1941, he jumped ship to newer and cheaper ventures and the Follies moved to the Liberty Theatre in the North Beach District where they would thrive under a new management all the way through the 1940s, supported, without a doubt, by the large number of military and transient personnel in San Francisco during World War II. A thin, small, closed cut to the right fore-edge, else a very good copy.

How To Make Draperies, Slip Covers, Cushions And …
by Mary Brooks Picken