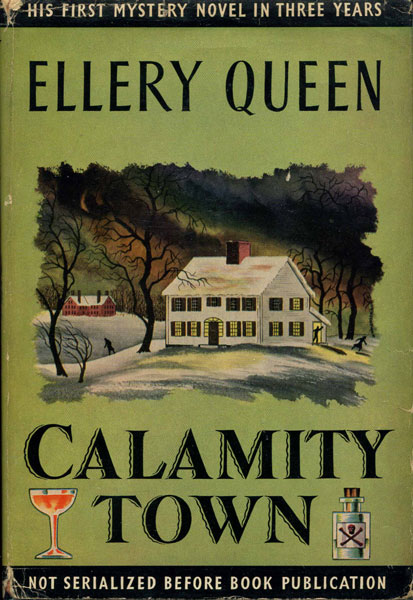 Other works by ELLERY QUEEN

First edition. Review copy with the slip laid-in. Fine, bright copy in price-clipped dust jacket, lightly edge-worn, with a few small nicks to spine ends, several short tears, and a bit of minor soiling to rear panel. "llery Queen moves into the small town of Wrightsville, somewhere in New England, in order to get some peace and quiet so that he can write a book. As a result of renting a furnished house, he becomes peripherally involved in the story of Jim Haight and Nora Wright. Nora's father is president of the Wrightsville National bank, "oldest family in town", and when the head cashier Jim Haight became engaged to his daughter Nora, he built and furnished a house for them as a wedding present. That was three years ago—the day before the wedding, Jim Haight disappeared, the wedding was called off, and the "jinxed" house became known as "Calamity House". Ellery rents it, just before the return of Jim Haight, and the wedding is soon on again. Ellery finds some evidence that Jim is planning to poison Nora and, after the wedding, she does display some symptoms of arsenic poisoning. But it is Jim's sister Rosemary who dies after drinking a poisoned cocktail. Jim is tried for the murder and it is only after some startling and tragic events that Ellery reveals the identity of the murderer."

The Woman In Blue
ELLY GRIFFITHS

The Curious Facts Preceding My Execution And Other …
DONALD E. WESTLAKE

A Jury Of Her Peers.
SUSAN GLASPELL