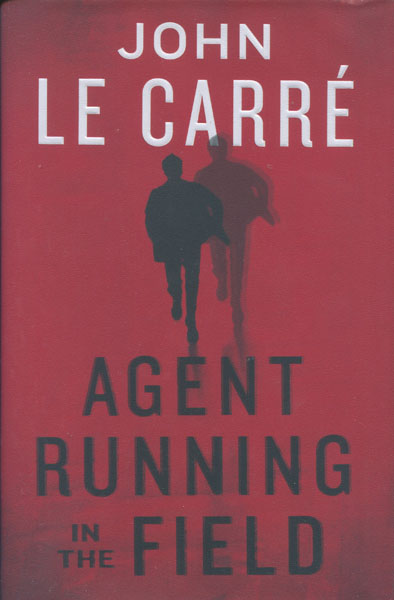 Agent Running In The Field

Other works by JOHN LE CARRE

First edition. Signed by the author on the title page. As new, unread copy in dust jacket. The author's latest book and he's signing considerably fewer copies nowadays. "Nat, a Secret Intelligence Service agent, 'not a desk jockey, not a social carer.' Convinced at 47 that his years running spies throughout Europe are over, he accepts one last assignment as the only alternative to being put out to pasture for good: assuming command of Haven, the London substation he describes to his unenthusiastic wife, human rights lawyer Prudence, as 'a Mickey Mouse outfit' where his job will be “either to get it on its feet or speed it on its way to the graveyard.” No sooner has Nat sunk into this forgettable ambit than three disquieting developments arise. Florence, a probationer who’s his nominal second-in-command, angrily quits over the unexplained cancellation of a project she’s designed, spearheaded, and pitched to the powers that be. Sergei Kusnetsev, a Russian defector who’s become a sleeper agent for Her Majesty’s Government, is contacted by Anastasia, a Russian agent who presumably either wants to put him to work, if she trusts him, or to expose him, if she doesn’t. And Ed Shannon, the much-younger researcher who joined Nat’s athletic club in order to play badminton with him and vent about the folly of Brexit and the rise of neo-Nazism in the States, suddenly appears in an alarming new role. Seeing the world as he knows it—not the new world order or the special relationship, but his own faded patch of it—threatened from every corner, Nat, determined to assert himself one last time, hatches a rickety plan to keep the pot from boiling over."

The Muddy Fork. A Work In Progress.
JAMES CRUMLEY