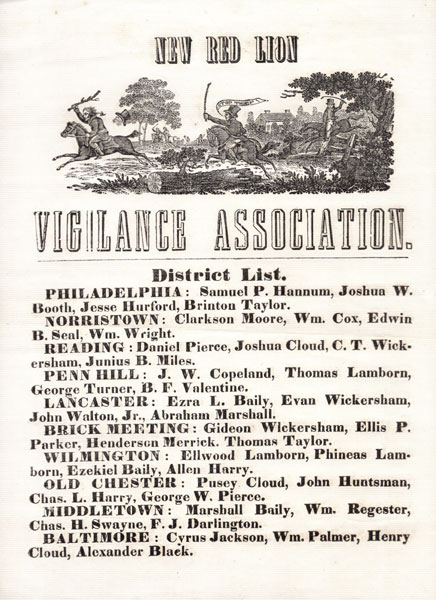 By-Laws Of The New Red Lion Association For The Detection Of Thieves, And Recovery Of Stolen Property

First edition. 8vo. 21 x 14 cm (8 1/4" x 5 1/2") original sewn wrappers contemporary marbled color wrappers, 8 pp. Accompanied by a 30.5 x 24 cm (12" x 9 1/2") engraved broadside of four mounted riders chasing a horse thief and the front rider calling "Stop Thief." The engraving is signed (Reuben S.) Gilbert, who was an active wood engraver and illustrator in mid-19th century Pennsylvania. Throughout the country in the mid 19th century a number of vigilance associations were formed primarily for the apprehension of horse thieves and other stolen property. The New Red Lion Vigilance Association was one of the associations which originated from Red Lion, Pennsylvania into towns of eastern Pennsylvania, Maryland and Delaware. Apparently these vigilance associations achieved great success in the recovery of property and the apprehension of thieves. The 8 page section of the association's by-laws contains six articles and each broken down further to sections, plus a sheet with the names of all 41 members of the association. The By-Laws state " Believing that an advantage would accrue, if citizens who reside in the neighborhoods contiguous to each other would organize themselves into a body, for the purpose of using individual exertion for the recovery of stolen property, and detection of thieves, that they may be brought to condign punishment, in conformity to the penal laws of the State, we, the subscribers, do therefore agree to form ourselves into an association, for the aforesaid purposes, to be known by the name of the NEW RED LION ASSOCIATION, for the detection of thieves and recovery of stolen property, and have for the government thereof, adopted the following By-Laws." Article III of the By-Laws states; "Sec. 1. For the purpose of securing as much dispatch as possible, in event of property being stolen, there shall be nine routes of pursuit, passing through and beyond the following points; -- Philadelphia, Norristown, Middletown, Reading, Lancaster, Penn Hill, Brick Meeting House, in Maryland; Wilmington and Old Chester, on which the members shall be distributed in as equal numbers as possible, and be required to ride, each on his respective route, whenever notified." Article III further states in Sec 2. "If any member of the Association shall have a horse, mare or gelding, stolen ot unlawfully taken away, he shall immediately notify sixteen members thereof, who shall reside most convenient to him, and furnish each of them with an exact description of the horse, mare or gelding, so stolen or unlawfully taken away, as is capable of, upon which notification and information they, the said members thus applied to, shall set out and ride two and two together, at least fifty miles on their respective routes, in which distance, if they receive no intelligence of the thief or thieves, nor the creature stolen, they may return home; but if they receive any information which induces a belief that they are on the right track, they shall pursue on while there is any reasonable probability of overtaking the thief or thieves; and every member so pursuing shall keep a regular account of his route, and expenses, which he shall submit to the Board of Direction for their inspection; and if a majority thereof shall approve the same, they shall direct the treasurer to discharge it." Both the By-Laws and the broadside are in near fine condition. This set is very scarce with OCLC listing a copy of the broadside and wrappers at the Hagley Museum.

Wanted Broadside Issued By Wm. A. Benton Of …
WILLIAM A. BENTON