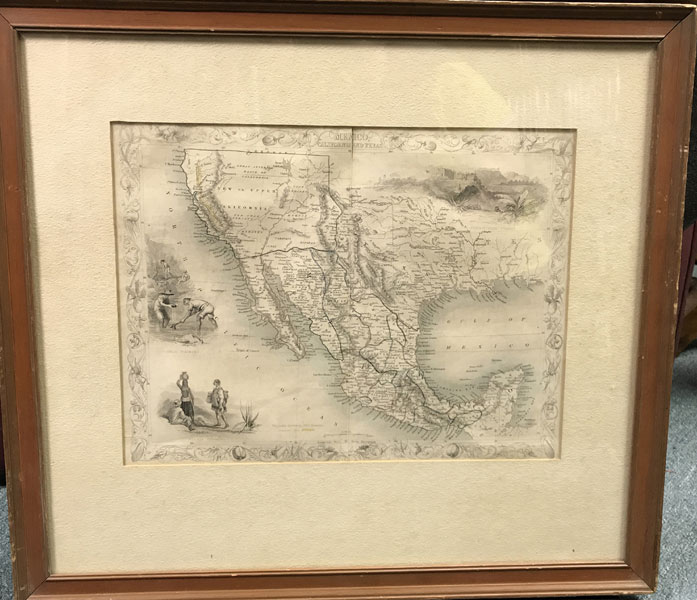 Map Of Mexico, Texas, And California

From The Illustrated Atlas and Modern History of the World Geographical Political, Commercial and Statistical.10" x 13 1/4" map in a matted 17 1/2" x 19 1/2" frame. Steel engraving, includes three vignettes depicting Gold Washing, Mexican Peasants, and Ruins at Uxmel, Yucatan, as well as an ornate botanical border depicting fruits, vegetables, and plats of the region. Original hand coloring. This is the preferred state of one of the first maps to depict the California Gold Rush of 1849 an shows the gold regions (highlighted in yellow), an illustration of Forty-Niners panning for gold, and the territory acquired by the United States from the Treaty of Guadalupe Hidalgo (outlined in green). It includes Southwestern United States and all of Mexico. Texas is shown with its early statehood borders. "The Great Caravan Route" (The Old Spanish Trail) is shown to run from central Arkansas through Santa Fe to "Pueblo de Los Angelos" on the Pacific coast, and locations of many Native American tribes are labeled. We have not examined the map out of the frame. The map is clean with lightly tones borders and a 1" split at the top at the centerfold as well as a 1/4" split to left margin.

The Divine Eccentric. Lola Montez And The Newspapers
by Doris Foley