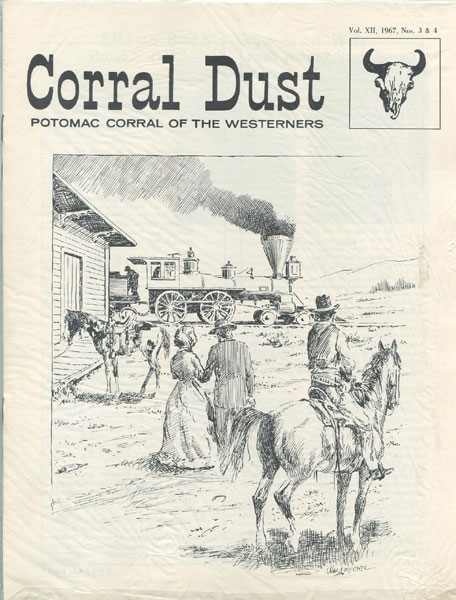 Sheriff Of Yavapai: An Account Of The Career Of George C. Ruffner

First edition. Quarto. Vol. XII, No. 3 & 4, of Corral Dust. Printed wrappers, 8 pp., triple column. Informative presentation of an account of the first Arizona sheriff to be immortalized in the Cowboy Hall of Fame in Oklahoma. Ruffner arrived in Prescott in 1882 and in the years that followed was a cowboy, freighter, rancher and, in 1894, sheriff of Yavapai County. Also contans an article by D. Harper Simms entitled, "Elfego Baca's One-Man War." In October 1884, in the town of Middle San Francisco Plaza, Baca arrested a drunk cowboy named Charlie McCarty. McCarty's fellow cowboys tried to take him by force, but Baca resisted and opened fire on the cowboys, killing the horse of John Slaughter's foreman, which fell on him and killed him. Justice of the Peace Ted White granted McCarty's freedom and summoned rancher Bert Hearne, to bring Baca back to the Justice for questioning relating to the "murder." Baca refused to come out of the jail; Hearne broke the door down. Shortly thereafter, shots run out from the jail, hitting Hearne in the stomach, resulting in his death. A standoff with the cowboys ensued. Allegedly, the cowboys fired more than 4,000 shots into the house, not one shot hitting Baca. After approximately 33 hours the battle ended when Francisquito Naranjo persuaded Baca to surrender. Baca was charged with murder and acquitted. Fine copy.

Rosettes, Ornaments And Metal Saddlery Specialties. Catalogue No. …
by The Enterprise Manufacturing Company

The Water-Power Of Maine
by Walter Wells