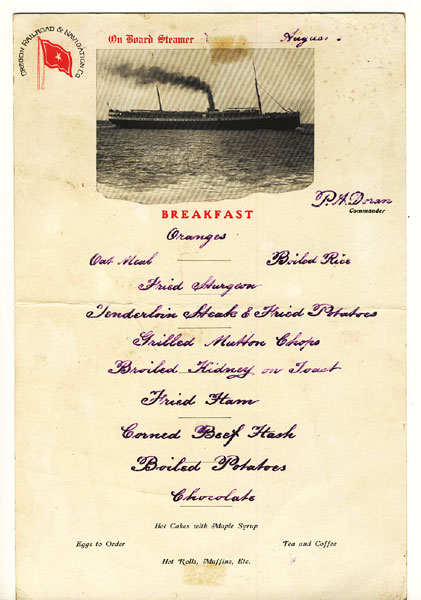 9 1/4" x 6 1/8" breakfast card with photograph of a steamer at the top and above the photograph states "On Board Steamer C...." (Name illegible; however, probably the Columbia as the only steamship operated by the Oregon Railroad and Navigation Company that began with the letter "C" was the Columbia). Company flag in red in upper left corner. Commander was Peter A. Doran. On July 20, 1907, Columbia departed San Francisco on a routine voyage to Portland, via Astoria under the command of Captain Peter A. Doran and filled with 251 passengers. That night, she was enveloped in thick fog near Shelter Cove, California. Despite the fog, Columbia was pushed to full steam, meeting strict orders to stay on schedule. She exchanged fog whistles with an unseen steamship, until 12:22 A.M., when the now visible lumber schooner San Pedro pierced the side of Columbia's hull. Over the next eight and a half minutes, pandemonium erupted aboard Columbia's decks as the great liner continued heading down by her bow and capsizing on her starboard side. In a final salute, Captain Doran tied Columbia's whistle cord, down, letting the whistle blow until the bridge had finally been pulled below the waterline. By morning, the news had reached land; Columbia had floundered in less than ten minutes, taking 88 people with her. Today, the wreck of Columbia lies undiscovered, 1,000 feet below the surface near Shelter Cove, California. Menu offers oat meal, boiled rice, tenderloin steak and potatoes, grilled mutton chops, broiled kidney on toast, fried ham, corned beef hash, boiled potatoes, chocolate, etc. Horizontal crease, light soiling and with light wear to the extremities. Very good. Rare.

Three Kingdoms Of A Great State. Inside Title: …
Minnesota State Board Of Immigration