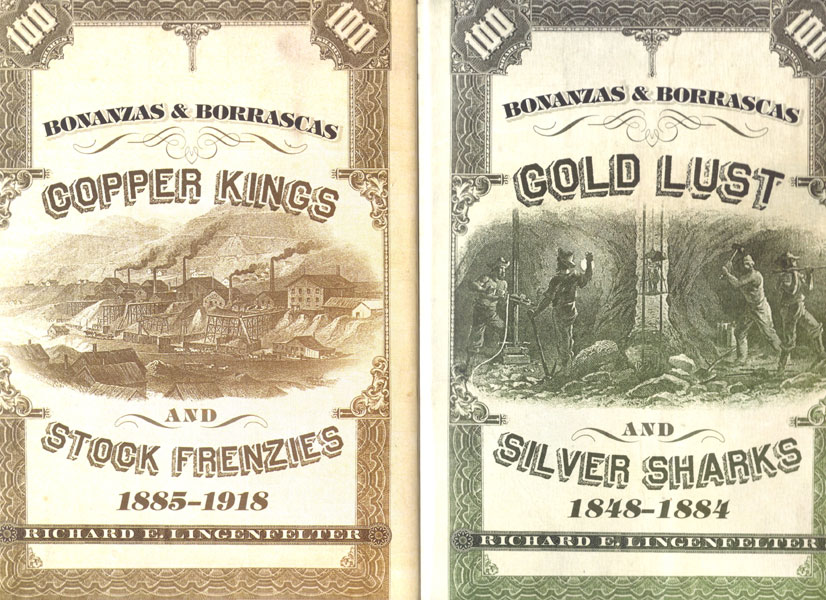 Volume 1: Gold Lust and Silver Sharks. 1848 - 1884. Western Lands and Waters Series xxvi. First edition. Thick octavo, xv, 461 pp., contents, illustrations, preface, appendix, abbreviations, notes, index. Between 1848 and 1884 western mines produced over $2.3 billion in gold, silver and copper, but mining stocks in those years were issued for nearly 10 times that amount. Most of those stock offerings were swindles ... only about 10 percent of the Western mines actually produced a profit. The real profiteers were the scallywags who promoted and manipulated mining stocks. Many of the swindles involved stock in borarascas, or worthless mines. But even when the ore body was good, promoters manipulated the stock, looted assets, padded expenses and lied about production. They bribed appraisers and reporters, they salted the mines. Volume 2: Copper Kings and Stock Frenzies. Western Lands and Waters Series xxvii. First edition. Thick octavo. 8vo. 586 pp., contents, illustrations, preface, appendix, abbreviations, notes, index. Highlights the copper fortunes made in Montana, Utah and Arizona. Among those who became rich were the Guggenheims, whose wealth came from Leadville smelting. Enormous fortunes were made by men who invested in mines, men who for the most part, were knowledgeable about metals and took the time to investigate the properties. The armchair investors who turned over their money to promoters rarely came out ahead. As new, in dust jacket.

A Tenderfoot In Tombstone. The Private Journal Of …
by Lynn R. Bailey

Some Reminiscences Of Old Victoria
by Edgar Fawcett