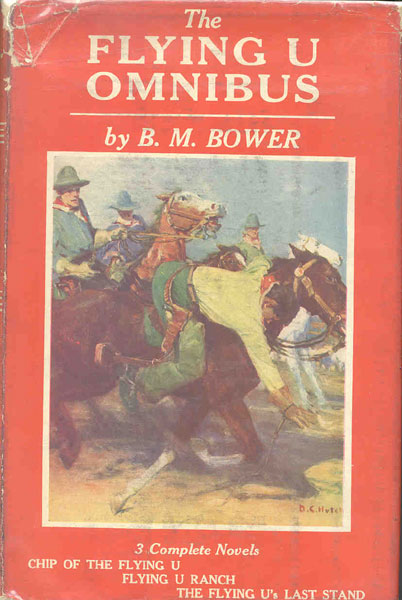 First edition thus. Three complete and unabridged stories, Chip of the Flying U, Flying U Ranch, and The Flying U's Last Stand. "In Chip, of the Flying U, Chip finds time on the side to fall in love with Della Whitman - and bump into difficulties with a Doctor Cecil Grantham. In Flying U Ranch, while the 'old man' was away his former partner, Dunk Whittaker, stocked a neighboring ranch with sheep - to the frantic rage of the Happy Family. In The Flying U's Last Stand, when Florence Graham sent a company of school teachers and farmers to take up claims on the Flying U's grazing range, she certainly started something." B.M. Bower, pseudonym for Bertha Muzzy Sinclair, wrote stories featuring cowboys and cows of the Flying U Ranch in Montana. They reflected, "an interest in ranch life, the use of working cowboys as main characters, the occasional appearance of eastern types for the sake of contrast, a sense of western geography as simultaneously harsh and grand, and a good deal of factual attention to such matters as cattle branding and bronc busting." Former owner's bookplate on front pastedown sheet, but covered by the dust jacket flap, else very good in moderately rubbed dust jacket with moderate wear to head and tail of spine and with moderate wear to the extremities.

The Natural History Of The Trans-Pecos, Desert Legends, …
by Brian R. And Eric G. Bolen Chapman