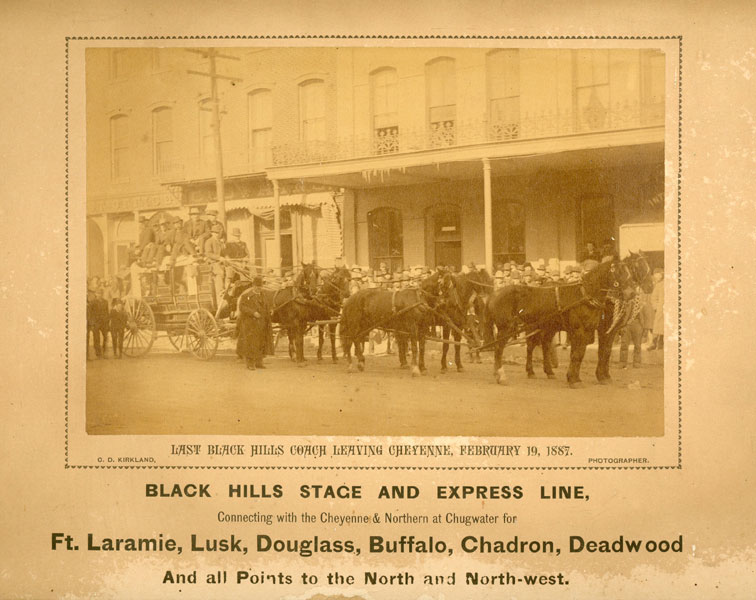 Black Hills And Stage Line Photograph. All Aboard For The Last Trip To The Black Hills

Other works by KIRKLAND, CHARLES D.

5 3/4" x 8 1/4" albumen print photograph on 10 1/2" x 1 1/4" light brown mount, printed title under image, printed text on mount. A scarce photograph taken in Cheyenne, Wyoming, of the last Black Hills stage to leave Cheyenne. Shown are at least eight men sitting on the roof of an apparently overloaded "Black Hills Coach" harnessed to six horses. A crowd has gathered on the porch in front of a nearby building to observe the occasion. Nicknamed the Deadwood Stage, the Cheyenne and Black Hills stage line, which ran from Deadwood to Cheyenne, was in existence from 1876 to 1887, when it was rendered obsolete by the arrival of the railroad. This photograph appears to commemorate the very last run on the Cheyenne to Deadwood line, although text below the image seems to advertise the line as well, which feels contradictory. The Deadwood Stage achieved national Wild West fame after being featured in Edward L. Wheeler’s Deadwood Dick series of half-dime novels and Buffalo Bill’s Wild West Show. Photographer Charles D. Kirkland opened a studio in Denver, Colorado in 1874. According to Carl Mautz's "Biographies of Western Photographers," he was active in Cheyenne in 1880 and 1884. This photograph provides evidence of his activity there in 1887 as well, suggesting that he was there from at least 1880 to 1887. Kirkland was also a manufacturer of lithium printing-out paper. Small abrasion with loss of proprietor's name at bottom center of mount, else very good.

Through The Fertile Northwest. Over The Scenic Highway
Northern Pacific Yellowstone Park Line

Letter From The Secretary Of The Interior, Transmitting …
B.R COWEN