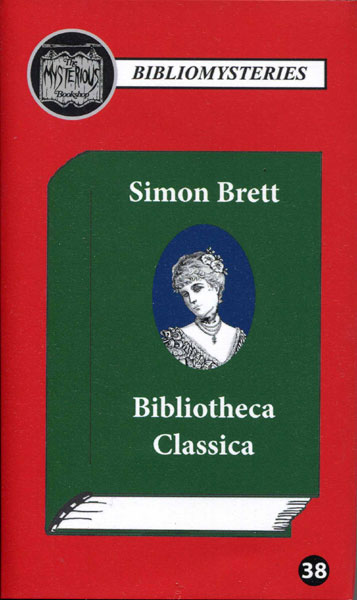 Other works by SIMON BRETT

First edition. A limited edition of 100 copies numbered and signed by the author. As new, unread copy in dust jacket. An antique book has a way of bringing the past into the present, carrying traces of all those readers that have possessed it throughout its lifetime. Sometimes those traces are as minor as a name, scrawled inside the front cover; other times they are more glaring, as, for example, the heavy eraser marks that censor Professor Derrick Rounsevell’s newly-inherited copy of Bibliotheca Classica, an obscure encyclopedia from the eighteenth century. A past owner endeavored to remove any lurid or indecent detail from the book’s entries, which, in cataloging tales from mythology, religion, and literary history, resound with unseemly acts. Curious about the origin of this bowdlerization, yet suspicious of internet research, the stodgy old professor enlists his younger wife Harriett to investigate. To Derrick's delight, Harriet learns increasingly intriguing details about the volume ... uncovering a history of manipulation, theft, and a century-old murder plot ... but, in the process, she also makes discoveries about her husband that Rounsevell no doubt hoped would remain buried. If he's not careful, the next thing to be erased may be his marriage!