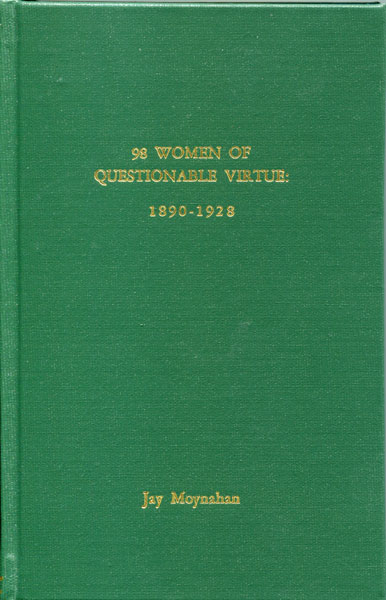 First edition. 8vo. Signed by the author. Limited to 825 numbered and signed copies. Green cloth, 117 pp., acknowledgments, introduction, illustrated from photographs, bibliography. In the process of my research I have found serious, light-hearted, interesting, profound and thought-provoking statements about and from the women in the oldest profession. I saved these in a special notebook with the idea of eventually publishing them. Although the photographs in this book are from the time period 1890-1920s, quotes are from more contemporary people. A quote appears under each of the photographs. These statements do not relate to the photographs, but they do represent opinions and observations about prostitutes and prostitution. It is important to note that none of these women were recipients of plastic surgery, breast augmentation, Botox treatments or any of the numerous physical alterations that women (and men) have access to in the twenty-first century. The photos were used for several purposes. First, some were used to produce stereo-views. These three-dimensional pictures were popular at the time. Second, some of the pictures were used to make French Postcards. These were risqué cards sold from under the counter in shops. Third, a portion of the photos were bought by men collecting risqué photographs of women in various stages of undress. Finally, some of the pictures may have been used by the women for advertising. The idea was that the man possessing the photograph would think of the lady pictured the next time he wanted to have a good time. She was, after all, a good-time girl. As new, without dust jacket as issued.

Report Of The Commissioner Of Indian Affairs To …
CHAS H BURKE

Typed Letter To A Law Firm Asking For …
BEGGS, GEORGE [MANAGER, FT. WORTH]