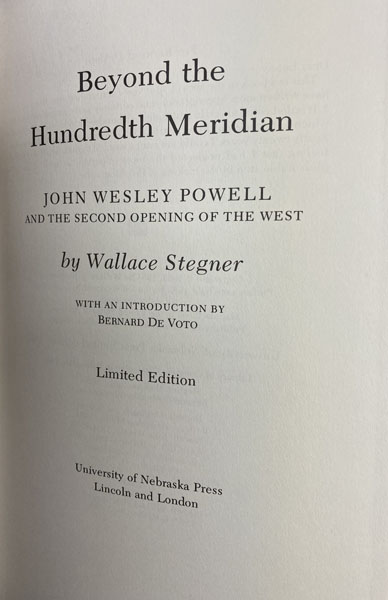 Beyond The Hundredth Meridian, John Wesley Powell And The Second Opening Of The West

Other works by WALLACE STEGNER

Limited Edition. 8vo. This edition limited to 250 copies of which this is No. 166 and signed by the author. Two-tone cloth. xxv [blank],.438 pp., map on front endpapers, preface to the limited edition author's note, introduction, Several pages of illustrations, notes, index. Introduction by author and historian, Bernard DeVoto. A classic of western literature and an excellent account of the importance of Powell's accomplishments in the study of the Colorado River, but also his continued importance in the study of the entire region and development of a scientific approach to the study and the resultant attitudes of the government and the people of the region. Stegner's excellent biography of Powell, and his explorations of the Colorado River and the Colorado Plateau, that contains a new Preface by Stegner. "Stegner points out the significance of Powell's thinking and writing on the problems of settlement of the arid lands of the West. The problem overcoming the denial of reality by people like William Gilpin, Captain Samuel Adams, and several members of Congress is an important part of the book. Stegner highlights the political maneuvering that was necessary for Powell to move his ideas forward when he was working as head of both the Geological Survey and the Bureau of Ethnology. If you want to know John Wesley Powell, read this book." - Ford 65. Wallace Earle Stegner (1909-1993) was an American novelist, short story writer, environmentalist, and historian, often called 'The Dean of Western Writers'. He won the Pulitzer Prize in 1972 and the U.S. National Book Award in 1977, and through his writing program at Stanford University, influenced generations of writers (Edward Abbey, Ken Kesey, Wendell Berry, Larry McMurtry). Fine, bright and unread copy without dust jacket (as issued) housed in the fine, original slipcase.

The Private Eye In Hammett And Chandler.
ROBERT B. PARKER