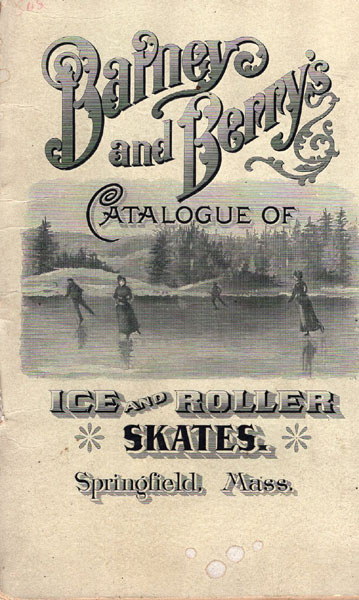 by Barneys And Berry

First edition. 13.2 x 8 cm. [5 1/8" x 3 1/4"], 36 pp., string-tied pictorial front and rear covers showing a skating scene on the front and medals and citations won on the rear. Inside front cover provides and assurance of high quality and inside rear cover shows their headquarter and factory location in Springfield, Massachusetts, which is devoted exclusively to the manufacture of skates. Numerous illustrations of both ice and roller skates along with extra parts and price lists. Also provided is a two-page skating program with 25 skating turns shown. Ryan Stevens on November 16, 2017 reported as follows: "The Barney & Berry company was founded at the old Warner's pistol plant near Springfield, Massachusetts. It was started by Everett Barney, a former supervisor of a small arms manufacturer during the Civil War who spent many a winter on the frozen ponds of nearby Framingham, and his old friend John Berry in 1865. Barney and Barney manufactured five hundred skates in their first year and later moved to Springfield, where they flourished in two locations for over fifty years. The company was very much a skate making contemporary of the Starr Manufacturing Company and in terms of marketing skates for the masses, they were right up there. Arthur R. Goodfellow's wonderful 1972 book Wonderful World of Skates; Seventeen Centuries of Skating tells us that "The Barney & Berry company was in business until 1919 when the firm was purchased by the Winchester Repeating Arms Co. of New Haven. At the height of its operation Barney & Berry were turning out 600,000 pairs of skates each year and employing 250 workers." The fate of Everett Barney and the reason the Winchester Repeating Arms Company bought out Barney & Berry was really quite depressing. In 1870, John Berry sold his entire interest in the company to Harvey and one of the Harvey Brothers, who coincidentally sold his shares to Barney as well only two years later. Barney was left to manage the company alone, a daunting task especially since he never recovered from the death of his only son, who perished of tuberculosis at the age of twenty six. Both of his marriages failed, and by the turn of the century he began to neglect the business. He was declared insane in 1913, and left his entire estate to the town of Springfield. At the time the Winchester Repeating Arms Company bought Barney and Berry, the firm was in receivership and the plant was in shambles. In the June 1968 issue of "Skating" magazine, Richard Stephenson wrote, "Despite its sad ending, the firm of Barney & Berry had a strong influence on the development of figure skating in the United States. It introduced skating to millions of people by providing quality skates at reasonable prices. Barney himself encouraged many of the leading figure skaters of the time, such as George H. Browne, an authority on the history of skating and founder of the 'international style' of skating in the United States. It is conceivable that, had it not been for the death of Barney's son, the firm of Barney & Berry would be producing quality skates today." One has to wonder if perhaps Everett Barney is one of the ghosts that now wanders the twists, turns and stairways that lead nowhere in the Winchester House, haunted by his own ghosts." Covers lightly soiled else a very good, sound copy.

Facts About Florida. Designed To Convey In A …
by Clyde Steamship Company