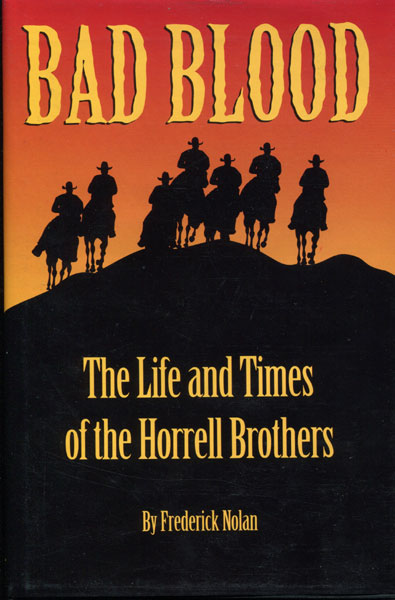 Bad Blood. The Life And Times Of The Horrell Brothers.

First edition. 8vo. Signed by the author. Cloth, xvii [1], 210 pp., acknowledgements, prologue, illustrated, biographical sketches, endnotes, works consulted, index. The seven Horrell brothers burned their names into the history books of Texas and New Mexico in the 1870s. The family lived in Lampasas, Texas and were raised around horses, cattle, and guns. They gained a reputation as troublemakers and left Texas after killing three state policemen during a gun battle. They fled to Lincoln County, New Mexico and became embroiled in a deadly dispute that was the precursor to the next decade's Lincoln County War. They fled New Mexico and returned to Lampasas and returned to the cattle business and lived peacefully for a time. Then they locked horns with Pink Higgins, a local rancher and a bad man to tangle with, which resulted in the Higgins-Horrell vendetta. Among Texas' deadliest and most famous family feuds. Well-researched and informative. Fine in dust jacket.

The Shay Locomotive, Titan Of The Timber.
by Michael. Koch

John Ringo, The Gunfighter That Never Was
by Jack Burrows

Dynamite And Six-Shooter, The Story Of Thomas E. …
by Jeff Burton