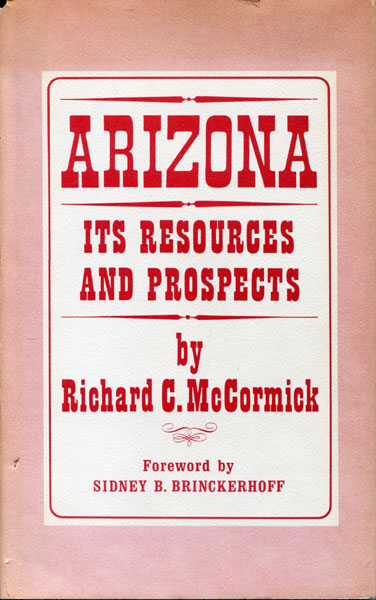 Arizona: Its Resources And Prospects. A Letter To The Editor Of The New York Tribune(Reprinted From That Journal Of June 26th, 1865). With A New Introduction By Sydney B. Brinckerhoff.

Other works by RICHARD C. MCCORMICK

First edition thus. 8vo. Inked gift inscription on the front fly leaf "To Don Schellie, With highest respect and regards. Sidney B. Brinckerhoff, May 2, 1968." Brinckerhoff provides an 18 page introduction and Schellie was a Tucson newspaperman and author. Stiff wrappers bound into a hardcover with titles stamped in gilt on the spine, 22pp., folding map, illustrated. A facsimile of the original edition noted as Herd #1381, with two illustrations and an 18-page introduction by Brinckerhoff added. Fine copy and scarce in the hardcover issue.

The History Of Lamar County.
A. W. NEVILLE

Photograph Album Of Various Caribbean Islands And Of …