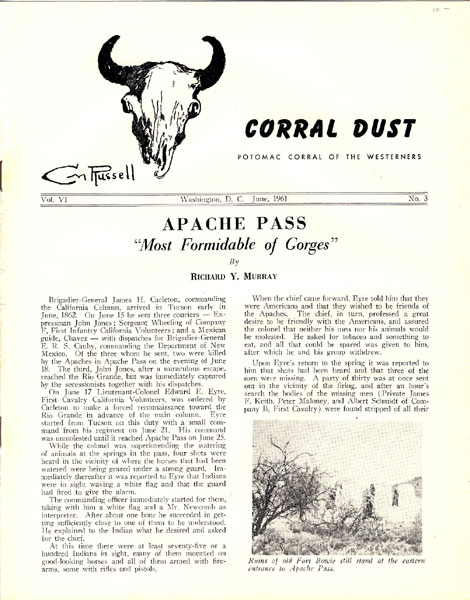 Apache Pass. "Most Formidable Of Gorges"

Other works by RICHARD Y MURRAY

First edition. Quarto. Vol. VI, No. 3, of Corral Dust. Printed wrappers, 8 pp. Old Fort Bowie at the eastern entrance to Apache Pass was erected to keep safe passage between Tucson and the Rio Grande. This area had been a constant source of problems due to renegade Apaches. Also includes article by Graham Hollister entitled, "Colonel Hollister's Westward Trek," a native of Ohio who came west in the 1850s and became a wealthy rancher and entrepreneur in California. Also an article written by William I. Palmer entitled, "Colorado - River of Conflict." Fine copy.

Kendall Of The Picayune, Being His Adventures In …
FAYETTE COPELAND

Blood Of The Prophets. Brigham Young And The …
WILL BAGLEY