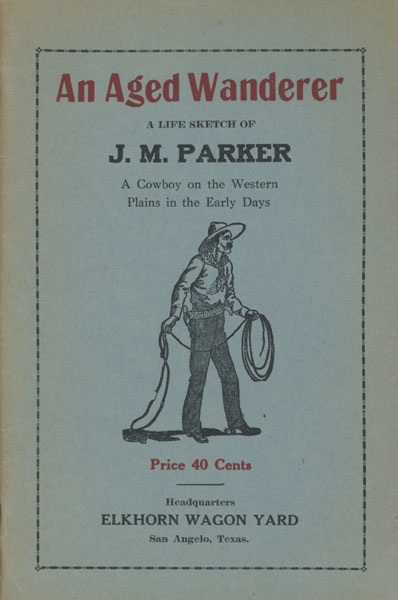 An Aged Wanderer. A Life Sketch Of J.M. Parker, A Cowboy On The Western Plains In The Early Days.

Other works by J. M. PARKER

First edition. Original pictorial blue wrappers, portrait verso front wrapper, 32 pp., wrapper title. Howes P78. Adams Six Guns 1679: "Exceedingly rare. An autobiography of James Monroe Parker, including his early days in West Texas and his experiences as a cowboy in the latter half of the 19th century. Also included are a number of songs and poems about cowboys and Texas. The author was an old Texas cowboy who became crippled with paralysis and sold these little books for a livelihood as he wandered over the country." [40 cents]. Adams Herd 1757. Adams One-Fifty 111: "In spite of its errors, it is much sought and important collector's item." Dobie, p. 126. A fine, clean copy of an elusive title housed in a cloth clamshell case with titles stamped in gilt on the spine.

Letter From The Secretary Of The Interior, Transmitting …
KELLY MOSES