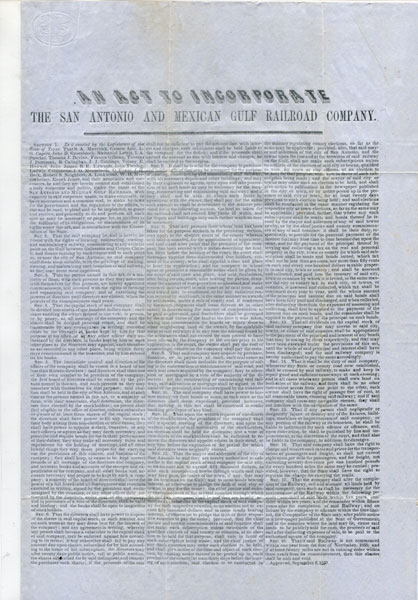 
First edition. Two 7 1/2" x 12 1/2" light blue sheets, printed on the first sheet only. The Texas state law that chartered the San Antonio and Mexican Gulf Railroad printed on light blue paper. The San Antonio and Mexican Gulf Railroad was founded in 1850 to connect San Antonio and Victoria with increasing maritime freight traffic at Port Lavaca and Indianola. The company suffered from financial and construction difficulties throughout its twenty-year life span, even after the federal government stepped in during early Reconstruction to pay for the rebuilding of much of the line. The railroad company was finally bought out by Charles Morgan and merged into his Gulf, Western Texas and Pacific Railway Company in 1871. Not in OCLC. Winkler 176 locates only the copy at the University of Texas. Minor discoloration at the folds and minor foxing to the rear leaf, else a near fine copy.

The Trail Drivers Of Texas, Interesting Sketches Of …
by J. Marvin Hunter