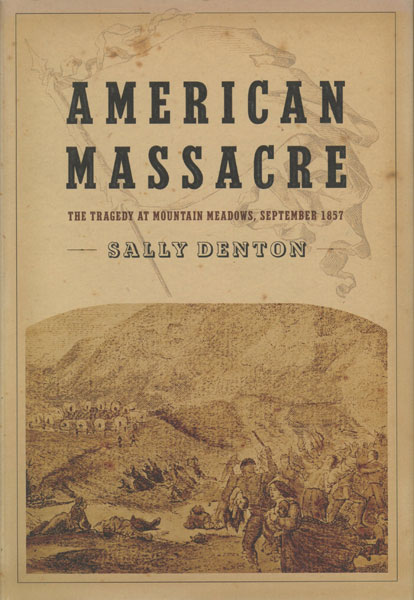 Other works by SALLY DENTON

First edition. 8vo. Two-tone paper over boards, xxiii [1], 306 pp., author's note, prologue, illustrated, plates, portraits, map, epilogue, notes, bibliography, acknowledgments, index. In 1857 in southern Utah a group of travelers were attacked by a band of Indians with the help of the Mormon community. After fending off the attack, the travelers were lured under a flag of truce, to give up their arms and be provided safe company as they traveled across Utah to their destination of California. Instead all grown men and women were massacred and the lives of a very few small children, who would be unable to recount the events, were spared. John D. Lee, who never denied his complicity at Mountain Meadows, was the only person executed by firing squad. Fine in dust jacket.

Report Of The Coal Lands Of The Deep …
JOHNSON, WALTER R. [CIVIL AND MINING ENGINEER AND CHEMIST, OF WASHINGTON, D.C.]

Pioneering In Southwest Texas. True Stories Of Early …
GRAY, FRANK S. [EDITED AND WITH A FOREWORD BY J. MARVIN HUNTER]