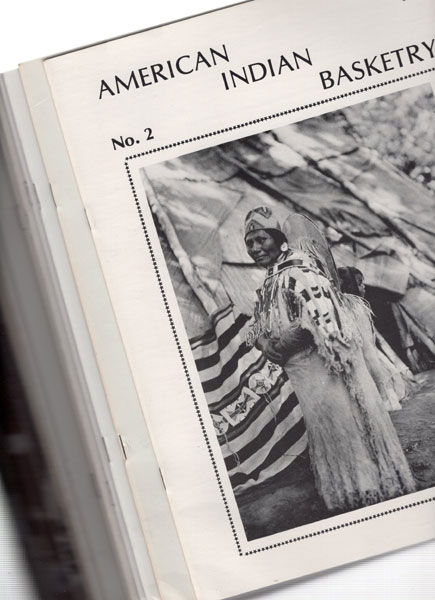 First editions. 4to. 19 of the 20 issues of American Indian Basketry Magazine, edited and published by John Gogol of Portland, Oregon between the years 1980-1985. The missing issue is Whole Issue No. 1. Most issues had a single focus including Cornhusk Basketry of the Columbia Plateau Indians; Twined Basketry of Western Washington and Vancouver Island; Indian, Eskimo, and Aleut Basketry of Alaska; Yosemite Miwok / Paiute Basketry; Pomo / Wintun / Mohawk Basketry; Klamath, Modoc, and Shasta Basketry; Papago Basketry; Washoe Basketry; Traditional Miwok Basketry; Traditional Arts of the Indians of Western Oregon; Utility Basketry of the Northwest Indians; American Indian Art: Values & Aesthetics; Potawatomi Basketry; Golden Decade of Collecting Indian Basketry; Columbia River / Plateau Indian Beadwork; Panamint-Shoshone Basketry; and Cowlitz & Wasco-Wishxam Basketry. The stated mission of the magazine was “… to sponsor research and communication in all aspects of the study of American Indian basketry, to inform an interested public, and to support the art of basket making among Native American women and to insure its survival by supporting the basket makers as much as possible.” That statement continued past Whole Issue No. 10 when the magazine changed its name to American Indian Basketry and Other Native Arts. Whole Issue No. 14 contained a revised mission: “American Indian Basketry and Other Native Arts exists to sponsor research and communication in all aspects of the study of Native American traditional arts, of which we consider basketry to be the most important.” Each issue, with most averaging 30+ pages, is filled with historical and contemporary photographs of native baskets and basket makers and other traditional arts and their creators. Some of the contributors of the highly respected and authoritative essays in each issue include Mary Schlick, Sue E. Devine, Craig Bates and John Gogol, himself. Individual issues of this highly sought-after magazine, devoted primarily to native artwork of western tribes, have sold in the past for $25! Each of the 19 issues are in Fine condition, bright and clean.