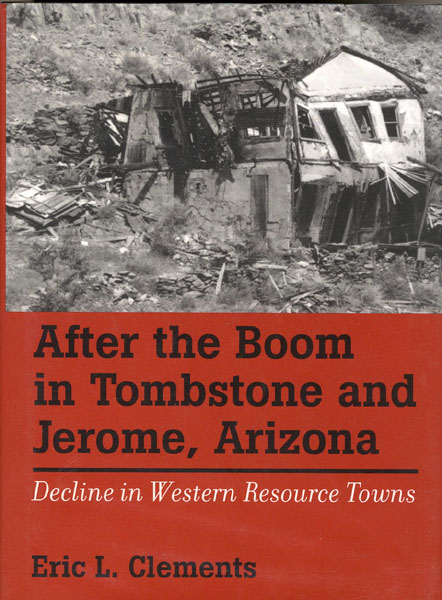 After The Boom In Tombstone And Jerome, Arizona.

First edition. 8vo. Black cloth, red endpapers, xv [3], 389 pp., acknowledgments, introduction, illustrated, maps, tables, notes, bibliography, index. The focus is on two Arizona towns that had their origins in mining bonanzas, and the reasons and the manners in which these towns declined as the mining boom ended. The Tombstone mines, discovered in 1877 and developed over the course of several years, supported the second largest town in Arizona Territory by 1882. Flooding of the mines and falling price of silver eroded the town's economy. Later there was a modest revival, but the bonanza days were over. The original Jerome claims were located a few years before those of Tombstone, and it was copper that attracted the mining men. Jerome's copper ore deposits eventually proved to be some of the great discoveries of high-grade copper ore in history, but even such a vast resource could not protect Jerome from economic misfortune. The towns faced an identical delemma, and that was how to stay alive. As new in as new dust jacket.