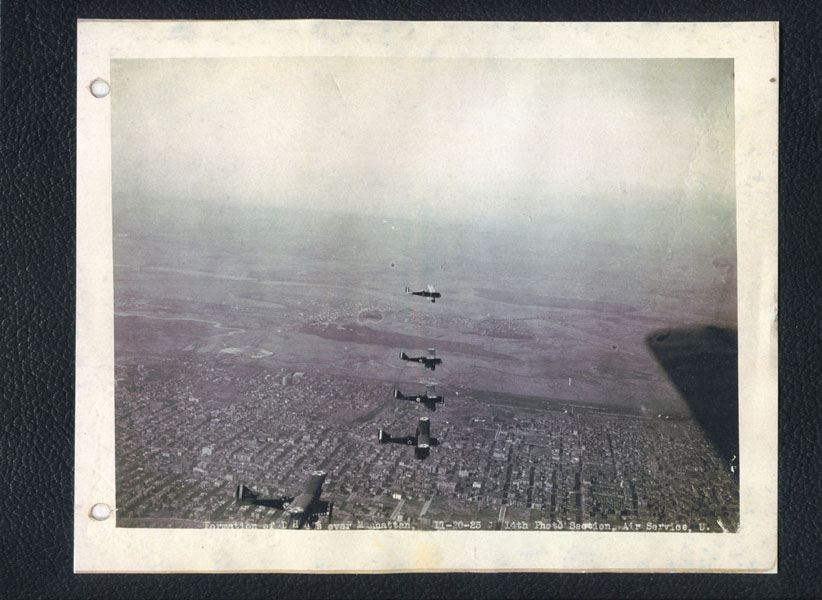 Other works by U. S. ARMY AIR SERVICE

AERIAL PHOTOGRAPH ARCHIVE – 1923-1925 Archive of 57 original aerial photographs from the 8th & 14th Photographic Sections Air Service, during the Aerial Mapping Survey of New York City and vicinity, and the Northeast. Mitchel Field, Long Island, NY: U.S. Army Air Service, 1923-1925. 57 original photos mounted on thick card stock (10" x 8"). 53 have identifications of place and Air Service Photo section at lower fore-edge of the images, and all are printed on glossy photographic stock, with some sepia-toned. All of the images are quite crisp with almost no fading, and have two small holes at the left gutter margin where they were apparently stored originally in a two- ring binder (minor bumping and chipping to some corners of the boards, a few images have lifted at the corners, and a couple have very minor loss, one with creasing to center of image, not affecting the quality of the image), a very good collection of images. A remarkable collection of a scarce series of aerial photographs taken by the 8th and 14th Photographic Sections of the U.S. Army Air Service. The images encompass planes in formation over New York, views of Manhattan, the Statue of Liberty, a factory fire in Jersey City, Fort Ticonderoga, the Zeppelin hanger at Lakehurst, New Jersey, Albany, Philadelphia, Hartford, Exeter, NH, numerous Air Fields, a scarce series of photos for the Jan. 24th,1925, Eclipse of the Sun, and more. The Air Service was created by executive orders of President Wilson in May, 1918 during World War I, and would eventually expand to nearly 200,000 personnel and 2000 aircraft by the end of the war, producing planes, as well as carrying out operations by aerial reconnaissance photo sections, dirigibles, balloons, and fixed wing aircraft. By 1923, the peacetime cutbacks had slashed the Air Service down to just under 10,000 men and 1450 aircraft, including 15 photographic sections, encompassing the above mentioned 8th and the 14th, commanded from 1920 to 1925 by Brig. General Billy Mitchell. Mitchell campaigned tirelessly and bitterly until his court-martial at the end of 1925 to establish the Air Service as a separate military wing independent from the Army and Navy. To aid this mission, he authorized a number of publicity stunts to emphasize the modernity and ability of the Air Service, including aerial mapping projects, speed and altitude records in cross country flying, scientific projects, and most famously the first flight around the world. The Air Service set up support facilities around the world for the fliers, and in April 1924 sent four aircraft, named Seattle, Chicago, Boston, and New Orleans west beginning from Seattle, Washington, and led by Major General Mason Patrick, Chief of Air Service. Two of the images in this collection show the two surviving Douglas World Cruisers which on Sept. 8, 1924 stopped over in New York, One of the photos shows a formation including the New Orleans flown by Lts. Eric Nelson and John Harding. They would complete the circumnavigation on Sept. 28, 1924 in Seattle, nearly 3 weeks later after these photos. The earliest of the dated photos shows 5 DH-4Bs flying in formation, on November, 20 1923 over Manhattan. The DH-4Bs set records of flying aloft through aerial refueling. The images dated July through November, 1924 by the 8th Photo Section during their Aerial Survey mapping projects include Hartford, Bridgeport, and New Haven, CT; Air Port in Boston, MA; Fairgrounds at Brockton, MA; Exeter, NH; Providence and Connecticut Island, RI; as well as 2 photos of a Nov. 1924 fire in the industrial section near the docks in Jersey City, NJ, showing tugboats nearby, as well as smoke billowing above the factories damaged by the fire. Images by the 14th Photo Section include the airfield and hangar Lakehurst Naval Air Station, NJ, which was the home of the ZR-3 Los Angeles dirigible, and would later be the site of the Hindenburg disaster; 3 photos of Mitchell Field, Long Island, NY; landing fields in Van Cortland Park, Bronx, NY; Governors Island; 2 photos of Roosevelt Field and downtown Albany at Albany, NY; aerial views of the Statue of Liberty, lower Manhattan including nice images of the Manhattan and Brooklyn Bridges; Fort Ticonderoga; Niagara Falls; Philadelphia; and photographs mapping the area around Mt. Mansfield, Vermont. Of particular interest are the series of 11 photographs showing the sequence of the total solar eclipse on Jan. 24th, 1925 over Connecticut. The skies were cloudy, but 12 planes, the ZR-3 Los Angeles dirigible, and many scientists and men with special cameras and instruments recorded the event. Ten of the photographs here are marked in stages for the eclipse, and an additional separate initial view that is marked Eclipse of the Sun, 14th Photo Section, Air Service, U.S.A. This collection offers an excellent historical record of the early years of U.S. aviation, as well as views of the Northeast during the 1920's.

What Happened To Squash-Boo. A Story Of A …
Unknown