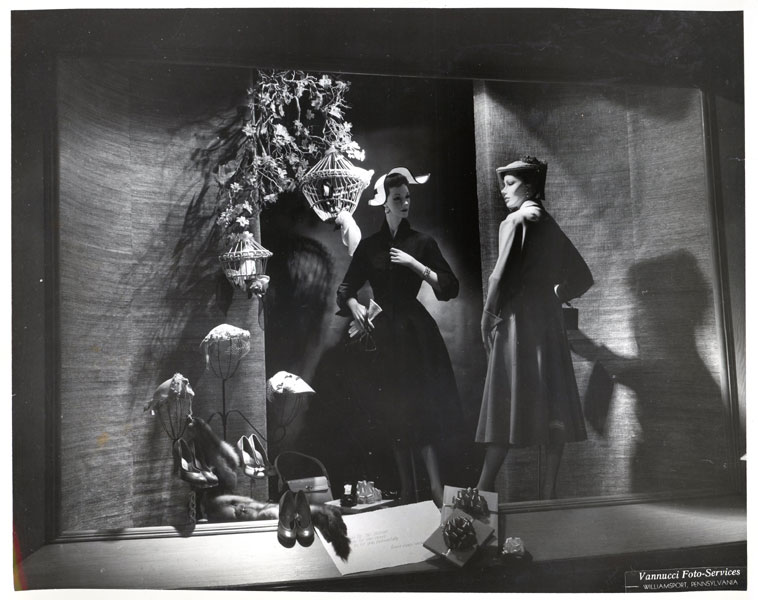 Oblong 4to. Recent blue cloth post-binder, brass screw posts at gutter margin, silver lettering stamped on front cover. 111 photos sized from 8" x 10," some with photographer's imprint and location within negative at lower margin of image, most with commercial photographer's stamps on versos, and a few with ink annotations, one with mimeographed press photo text. All images are preserved in archival polyester sleeves. A marvelous archive of 111 photographs depicting mid-20th-Century window displays, store interiors and fashion fixtures, men's and women's fashions, and historic tableaux windows at the L. L. Stearns & Sons Department Store in Williamsport, Pennsylvania. The remarkable photos include images of designs by Henry Rosenfeld, Christian Dior and Pierre Balmain at the time directing Lucien Lelong’s couture house, John Robert Powers, McGregor Doniger, Walter Lampl, Scandale lingerie along with Springmaid sheets, Bendix & Frigidaire Washers, and Koylon Foam mattresses. This collection of photographs vividly document the decade of L. L. Stearns & Sons Co. department store advertising window and showroom displays in Williamsport, Pennsylvania, following World War II. Nearly all of these images were supplied by the two primary commercial photographers contracted by the L. L. Stearns advertising department, along with what appear to be a some in-house productions as well. The Mid-20th-Century fashions including examples of outfits by such designers as Henry Rosenfeld, Christian Dior, Pierre Balmain, and John Robert Powers, featured the move back to femininity in the post-War era, with many featuring Dior's full skirts, and waist-cinching jackets, as well as puffed shoulders, and modest cuts with mid-length dresses. The images of the 1950's include college fashions, flaring skirts fashions for travel, surrealist inspired "keyhole" designs, an emphasis on domesticity with flowing wedding dresses, fabrics, appliances to aid the American household, and more. Also included are several window displays touting the Scandale lingerie line, the historic French lingerie brand first created in 1932 by Robert Perrier, and eventually taken over in 2008 by the Hop Run Group in Hong Kong, with actress, part owner, and designer Halle Berry offering impetus to the brand in the 21st Century. Also present are images of Van Raalte nylon stockings and lingerie which rapidly became more available and popular following the Wartime restrictions and rationing. John Robert Powers (1892-1977) dresses and designs were an outgrowth of his famed modeling agency founded in 1923, which even inspired the 1943 film, "The Powers Girl." Although the window displays of Lucien Lelong brand dresses bear his label, following World War II Christian Dior and Pierre Balmain had helped to relaunch and upgrade the historic ready-to-wear couture line, which would also launch the career of designer Givenchy. Henry Rosenfeld had risen from career as shipping clerk in Manhattan's Garment District to launching his budget label in 1942, which by the post-War period dominated the budget label dress market, and in the 1950's was featured in 12,000 stores across the US including Lord & Taylor. A few of the photographs for the Walter Lampl design label, reflect the efforts of Walter Lampl, Jr. to expand the company from its historic jewelry line into women's fashions. He and his brother Burt designed and marketed specialized charm bracelets at the time as well. L. L. Stearns & Sons was originally founded by Laten Legg Stearns in 1850 in Jersey Shore, Pennsylvania, who rafted down the Susquehanna River to Williamsport, Pennsylvania, following the Civil War and brought his sons into the department store partnership in 1885. By the time of its closing in 1984, L. L. Stearns & Son was one of the oldest and largest incorporated department stores in the US owned and operated by one family. Vannucci (1921-2007) launched his commercial photography studio in Williamsport following World War II, documenting the city and Lycoming County for decades, and the company later returned after 2000 to downtown Williamsport. Somerville (1886-1956) worked as longtime commercial and portrait photographer in Williamsport before and after World War II until his death. A couple photos with minor creases. Near fine. These photographs provide a fine visual archive of the men and women's fashions, household furnishings, appliances and styles in post-War America.

This Is Zion. An Interpretation Of A Colorful …
ALLEN HAGOOD