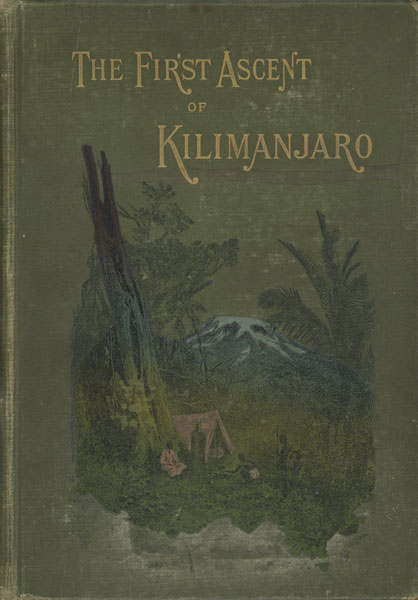 Across East African Glaciers. An Account Of The First Ascent Of Kilimanjaro

Other works by DR. HANS MEYER

First edition. Thick 8vo. Translated from the German by E. H. S. Calder. Color, full green pictorial cloth, light green endpapers, xx, 404 pp., frontispiece (general view of Kilima-njaro from the S. E.), preface, introductory, top edge gold gilt, illustrated, plates, maps, bibliography, index. Contains forty illustrations and three maps. The frontispiece and eight photographs were printed in Germany. Detailed appendices on the geology, geography, flora (mosses, lichens), and insects of the region. Hans Meyer was geologist and experienced climber who made four trips to the Kilimanjaro region in 1887-1889, culminating in his successful ascent, the first undisputed summit of Kibo, the highest of the mountain's two peaks, in 1889. In an earlier attempt, Meyer and his companion Oscar Baumann had the misfortune to arrive in the midst of an Arab revolt against German traders on the East Africa coast. They were taken prisoner and held hostage until a substantial ransom was paid. Meyer's ultimate success has been attributed to his recognition that the greatest obstacle to achieving the summit was the lack of food in the upper regions. He brought a sizable and well organized party and established several camps on the mountain, allowing him to make multiple attempts at the summit without descending to the base. His lively and highly readable account of the expedition is arguably the most important work on African mountaineering. Professionally recased with the original spine laid down, light rubbed at the spine ends, corners, and extremities, former owner's neat inked name on the half title page, else a solid very good copy with contents clean and attractive.

The Geography And Resources Of Arizona And Sonora …
SYLVESTER MOWRY

Reports Of Explorations And Surveys, To Ascertain The …
DAVIS, JEFFERSON [SECRETARY OF WAR].

With Golden Visions Bright Before Them. Trails To …
WILL BAGLEY

Index To The Executive Documents Of The House …