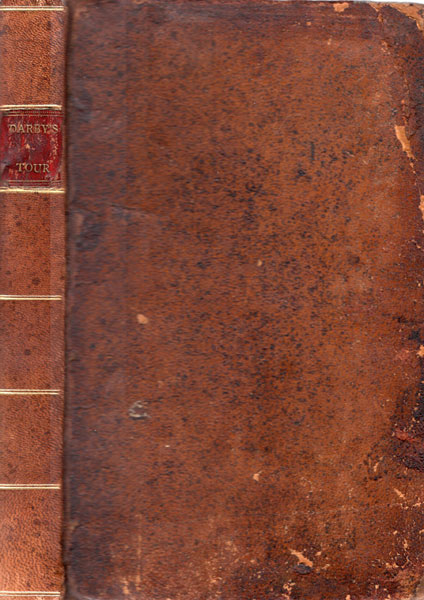 A Tour From The City Of New-York, To Detroit, In The Michigan Territory, Made Between The 2d Of May And The 22d Of September, 1818

Other works by WILLIAM DARBY

Publication: Published for the author, by Kirk & Mercein, 1819, New York

First edition. 8vo. Copy of DeWitt Clinton and with his inked signature at top of title page. Original tan calf, re-backed with original spine laid down, titles stamped in gilt on leather spine label, viii, 9 - 228 pp., plus addenda lxiii, blank, plus seven pages of Index, frontispiece (color folding map), preface, to the reader, three folding maps (including frontispiece), index. Copy lacks the errata slip tipped in to page 8. Darby (1775-1854), a leading surveyor, geographer, and member of the New York Historical Society, "chronicles his journey up the Hudson, across New York to Ogdensburg and Sackett's Harbor (on Lake Ontario), and on to Buffalo and Detroit.He gives an accurate and detailed description of the path he traveled across New York, southern Ontario, Ohio and Michigan, and offers one of the first systematic American views of the Michigan Territory. His return trip to New York took him back along the American shore of Lake Erie to Buffalo and Albany (by way of Auburn, the Finger Lakes, and Schenectady). Appended to these letters are "general remarks" (which include excerpts of a speech by Governor Clinton to the New York State Legislature), a description of Ballston Spa, a letter Darby received about the not-yet-opened Erie Canal, and long excerpts from Bouchette's Canada" (LC Online Catalog). A copy with distinguished provenance: DeWitt Clinton (1769-1828) was an American politician and naturalist who served as a US Senator, Mayor of New York City, and the sixth Governor of New York - in this last capacity, largely responsible for the construction of the Erie Canal. Howes notes that only one map in some copies, all three are present here. Inked signature of former owner O. V. Tracy on front fly leaf, covers have had some cosmetic restoration with fore-edges and corners repaired, scattered foxing throughout the text, else sound and tight with maps in near fine to fine condition. Overall a very good, sound copy.