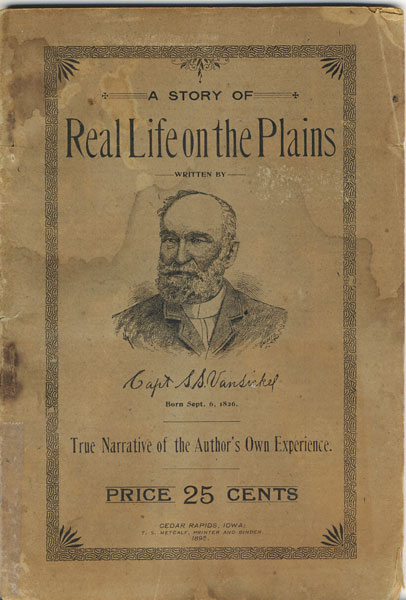 A Story Of Real Life On The Plains!

Later printing. 12mo. Originally printed in Kansas in 1875. Pictorial stapled wrappers, 50 pp., preface, one illustration. A true narrative of the author's experiences on the plains in 1874 and 1875 while a buffalo hunter ranging from the Pan Handle of Texas through Oklahoma and Kansas with much centering on Dodge City. He provides accounts of his experiences with Indians, his narrow escape from death during a severe winter storm, in which all his comrades died and he alone escaped. Due to the storm, he lost nearly all of his fingers and portions of his feet. Because of the severity of his injuries he relied on selling this booklet for the support of himself and his family. Howes V42 says "An episode in the life of a buffalo hunter; includes an account of the Adobe Walls Fight." Old water stain to the front and rear covers, but not affecting the text, lower edge of spine reinforced with cellophane tape, and light wear to the extremities. Text block is in very good condition. Housed in a 4-point cloth clamshell case with titles on leather label on the spine.

The Reynolds Campaign On Powder River.
by J. W. Vaughn

Pocket Map Of Bennett County South Dakota. Including …
by Charles A Bates