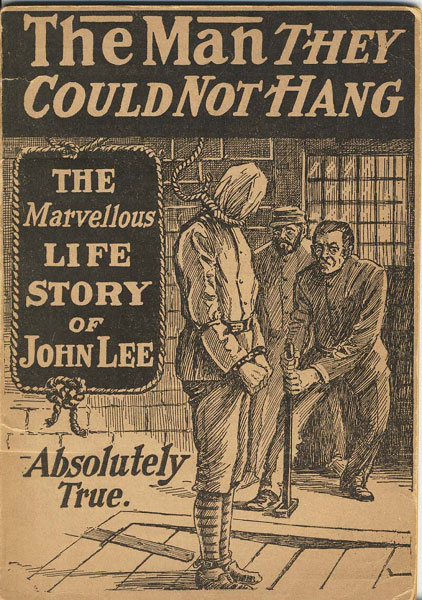 The Man They Could Not Hang. The Marvellous Life Story Of John Lee [Cover Title]

7 1/4" x 5" pictorial wrappers. 64 pages with 32 pages of advertisements by Johnson Smith & Co., seller of novelties and practical joke items. 18.5 cm. The story of John Henry George Lee, better known as John "Babbacombe" Lee, an Englishman who served several years in the Royal Navy and was a known thief. In 1885, he was convicted of the brutal murder of his employer, Emma Keyse, at her home at Babbacombe Bay near Torquay on 15 November 1884. The evidence was weak and circumstantial, amounting to little more than Lee having been the only male in the house at the time of the murder, his previous criminal record, and being found with an unexplained cut on his arm. Despite this and his claim of innocence, he was sentenced to hang. On 23 February 1885, three attempts were made to carry out his execution at Exeter Prison. All ended in failure, as the trapdoor of the scaffold failed to open despite being carefully tested by the executioner, James Berry, beforehand. As a result, Home Secretary Sir William Harcourt commuted the sentence to life imprisonment. Lee continued to petition successive Home Secretaries and was finally released in 1907.

Hotels And Resorts On Or Reached By The …
Southern Pacific - Sunset, Ogden & Shasta Route

Scorpion, A Good Bad Horse
by Will James