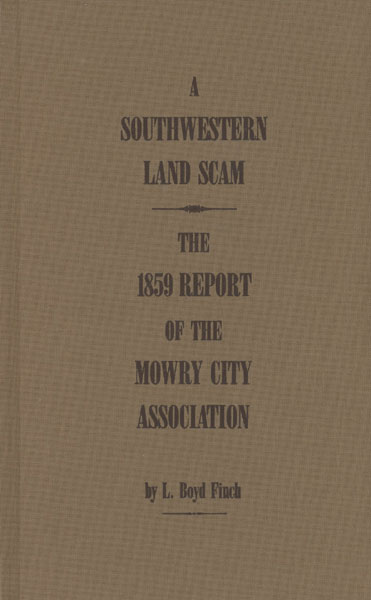 A Southwestern Land Scam. The Report Of The Mowry City Association

First edition. 8vo. Limited edition of 100 copies numbered and signed by the author, of which this is number 15. Brown cloth, titles stamped in brown on the front cover and spine, light tan colored front and rear endpapers, [6], 44 [3] pp., illustrated, map, notes. Mowry City was the result of one of the earliest land scams in the American Southwest. In the late 1850s, three promoters, Samuel J. Jones, Lewis S. Owings and Robert P. Kelley, published the pamphlet, "Report of the Mowry City Association, Territory of Arizona, for 1859." The reported painted a picture of Mowry City as the future site of the territorial capital of Arizona and grossly misrepresented the area's resources and prospects. An early widely publicized Arizona land scheme whereby there was no townsite, and the promoters did not have title to the land. Located today approximately 20 miles north of Deming, New Mexico. As new, unread copy without dust jacket, as issued.

Log Of An Arizona Trail Blazer.
by John A. Rockfellow

Smoky, The Cow Horse.
by Will James

Mrs. Earp, The Wives And Lovers Of The …
by Sherry Monahan