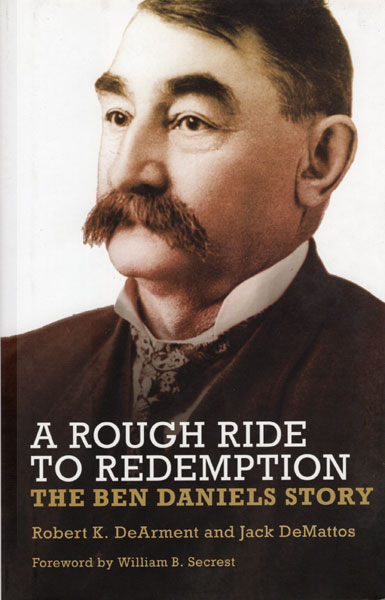 A Rough Ride To Redemption: The Ben Daniels Story

First edition. 8vo. Two-tone quarter cloth and boards, titles stamped in white on the spine, yellow endpapers, xvi, 246 [2] pp., frontis., foreword, acknowledgments, introduction, illustrated, portraits, notes, bibliography, index. Benjamin Franklin Daniels was a feared gunman who typified the journeyman gunfighter every bit as much as those whose names have become legend. He spent time on the buffalo ranges of Texas, in the roaring cowtown of Dodge City, and in the mining boomtown of Cripple Creek, Colorado. This book traces his rise from an outlaw and convict to presidential protege and high-ranking officer of the law. He was considered to be "the most controversial of Teddy Roosevelt's White House Gunfighters." As new, unread copy in dust jacket.