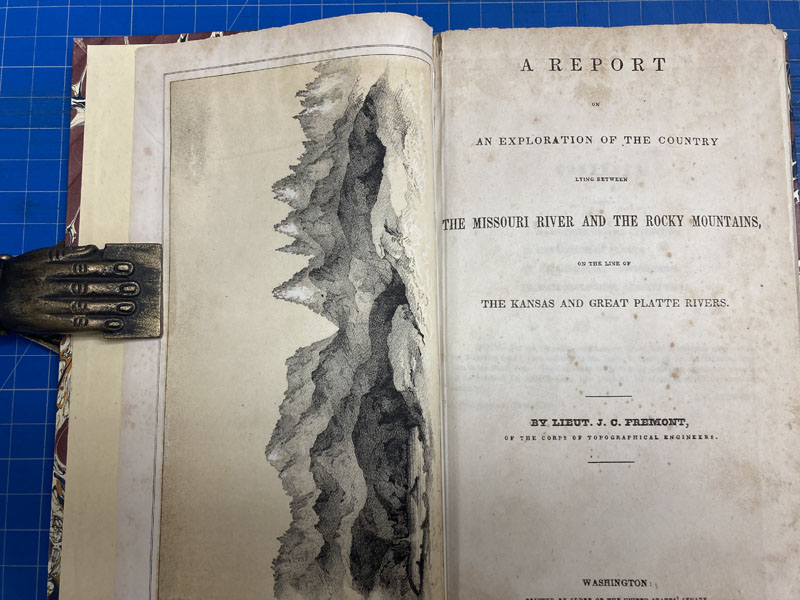 A Report Of An Exploration Of The Country Lying Between The Missouri River And The Rocky Mountains, On The Line Of The Kansas And Great Platte Rivers

Publication: Printed By Order Of The United States Senate, 1843, Washington

First Edition of Fremont's first expedition to the Rocky Mountains. Octavo. Bound without preliminary "Transmission" page, but with title-page, contents page and with frontispiece and five plates- three of which are tinted-, by E. Weber & Company of Baltimore. With a large folding map of the expedition. Modern quarter morocco over marbled boards, [4], [7] - 207 pp., frontispiece, folding map. This is Senate Document 243, 27th Congress, 3rd Session. Washington, [D.C.]: Printed by Order of the United States' Senate, 1843. Streeter 3130 says : "This expedition was designed by Senator Benton and the expansionist group in Congress to publicize the first main division of the route to Oregon, for though this was well known to the fur traders, the region west of the Missouri was still terra incognita to the general public." This report, as well as the expeditions themselves, received much promotion and exposure from Fremont's father-in-law, Sen. Thomas Hart Benton. The report guided Oregon emigrants and California gold seekers, and firmly established Fremont's reputation. The first expedition consisted of 25 men, with Kit Carson as a guide. They went a little beyond South Pass. "Fremont made a flamboyant report about the trail west in his A Report on an Exploration of the Country Lying Between the Missouri River and the Rocky Mountains on the Line of the Kansas and Great Platte Rivers. The report was reprinted in newspapers up and down the East Coast, and the news struck a nerve with tens of thousands. Fremont reported on picturesque Indian customs, a hospitable prairie and desert that was paved with wild flowers. 'Fremont has touched my imagination,' wrote poet Henry Wadsworth Longfellow. 'What a wild life, and what a fresh kind of existence.'" A nicely presented and tight very good copy.

The Mccartys, They Rode With Butch Cassidy
E. RICHARD CHURCHILL